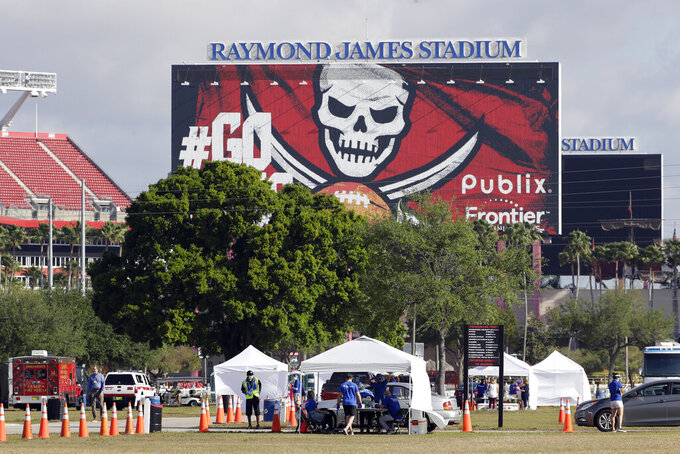 FILE - In this March 25, 2020, fikle photo, medical personnel from BayCare test people for the coronavirus in the parking lot outside Raymond James Stadium in Tampa, Fla. Nobody can say with precise certainty how many coronavirus tests that the NBA, NHL and Major League Baseball would need before those leagues can resume playing games. (AP Photo/Chris O'Meara, File)

MIAMI (AP) — Politicians, players and owners are trying to figure out a way to get baseball, basketball and hockey going again, not only for economic reasons but as a welcome diversion for a social distancing nation facing uncertain times.

But to do so would require commandeering thousands of test kits each week for millionaire pro athletes and support staff, something many view as unseemly, especially when ordinary Americans are waiting in line.

Leagues know it would be a terrible look for them to jump the testing line. Acutely aware of the potential backlash, commissioners and owners are saying that, until the public has more access to testing, they don’t want to secure tests for players. The NBA even told teams in a memo Thursday that it would be inappropriate to test asymptomatic players and coaches for now — but the league does expect to have testing available when it's time to return to practices and games.

The NBA plans to allow teams to reopen some facilities May 8, but only for voluntary workouts and in cities where local governments allow. And there is no timetable yet for a return to practices and games, in large part because the testing issue remains unsolved.

“We would have to ensure that testing is widely available and front-line health care workers have access before we begin talking about regular testing in the context of professional sports,” NBA spokesman Mike Bass said.

The economic impact of sports not happening is beyond enormous: From athletes — NBA players alone stand to lose roughly $850 million in salaries if this season doesn't resume — to the thousands of part-time workers around stadiums. Broadcasters have lost millions and furloughed thousands of workers, and sports books saw nearly 80% less action this March than they did in March 2019. All of the above reduces tax revenue to local governments.

President Donald Trump wants sports back for both economic and morale reasons, knowing that once games start getting played again, Americans will have something to cheer for — whether fans are in the stands or not. Sports leaders have met with the White House multiple times to discuss that goal. Trump has been told testing availability is critical to any restart plans, a person with direct knowledge of those talks told The Associated Press, speaking on condition of anonymity because few details of the conversations were to be publicly shared.

“I don’t want people to get used to this because this virus is going to be gone,” Trump said in a White House coronavirus briefing. “And when it’s gone, you want to get back to normal."

Harvard researchers say the U.S. should be testing at least a half-million people daily, while the White House estimates about 200,000 tests are being administered each day.

Some teams were sharply criticized for getting their players tested when the pandemic was beginning to take hold in March. The leagues want to avoid a similar blowback.

“The threshold question is the health question. That’s where we’re spending the most time,” MLB Commissioner Rob Manfred said. “The ones that are the most worrisome are the ones that are beyond their control.”

According to Major League Baseball, 3,000 kits would need to be available for players, staff, broadcasters and others for every round of testing to get its season going and keep it going. Even if the NHL and NBA return with just 16 postseason teams on the ice and courts, those leagues would likely require tests for a minimum of 1,000 players and staff. And there’s no telling how often — Daily? Every few days? Weekly? — the tests would be required to be administered.

With tests still in short supply, that's not a great look.

“We know that 50% of people are asymptomatic and we need to catch them before they spread the disease,” Dr. Vincent DeGennaro, the CEO of rapid-test maker Abacus Pharma International, told Miami television station WFOR this week. “And by testing everybody and having those tests here, we should be able to start to get back to some semblance of normalcy and talk about opening up.”

Some health care officials have said an equally problematic issue is a shortfall of personal protective equipment — masks, gowns, gloves and the like — that are needed by the people tasked with administering the tests.

“We don’t want to use a disproportionate number of testing resources if it’s limited,” NFL lead counsel Jeff Pash said. “We want to make sure that we’re testing people in an appropriate way if we do it and have clear and consistent standards. I think that we very much would take our guidance on that from the medical and public health experts.”

Dr. Rebekah Gee, Louisiana’s former health secretary and CEO of Louisiana State University’s health services division, said reopening of sports should not be considered until the country gets a handle on the sickest people through testing and contact tracing.

“I’m a huge (New Orleans) Saints fan and I want to go to the Superdome too,” Gee said. “But am I willing to risk my life for this? No, I’m not. We’ve got to be smart and shouldn’t be giving people false reassurances.”

The PGA Tour said it is reviewing what it will need from a testing standpoint before its scheduled return to play without fans in June. NASCAR is returning later this month, also without fans — and without COVID-19 testing. Temperatures of everyone accessing the track will be taken and other strict precautions will be in place, but for now coronavirus tests are not part of the restart plans.

The NBA, NHL and MLB likely won’t have that luxury, for the simple fact that athletes in those sports are often in extremely close contact with one another during play.

“Those tests remain in short supply,” NASCAR vice president of racing operations John Bobo said. “Getting results can take two to three days. Really, those tests should be targeted for people most in need.”