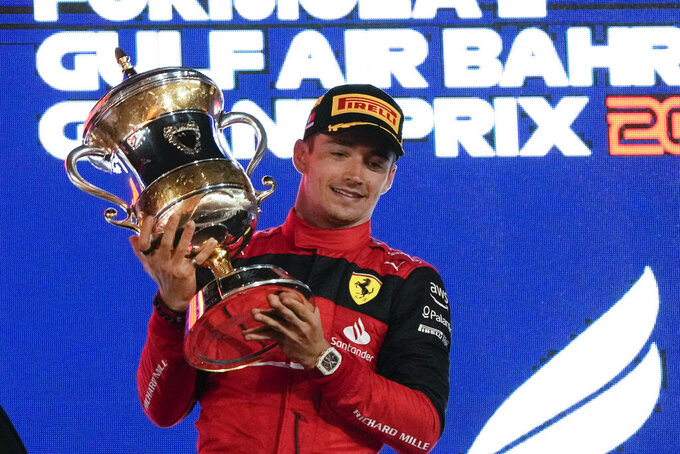 SAKHIR, Bahrain (AP) — After winning last year's Formula One title on the last lap of the last race, Max Verstappen's title defense began with a different sort of drama — his critics might say karma — as his Red Bull car retired just laps from the end of the season-opening Bahrain Grand Prix on Sunday.

Ferrari clinched a 1-2 finish with Charles Leclerc winning the race, almost six seconds ahead of teammate Carlos Sainz Jr. Lewis Hamilton, who lost the title so painfully to Verstappen in 2021, enjoyed better luck this time with an unexpected third place.

Verstappen was second behind Leclerc with a handful of laps left in the 57-lap race under floodlights. Then, after the race had restarted with a safety car, Verstappen became increasingly panicky on race radio as he struggled with steering. Moments later he was in the team garage, soon followed by his teammate Sergio Perez, as Red Bull's race dramatically collapsed.

“The faster I was going, I could barely steer (and) then suddenly I had to retire, everything just switched off," Verstappen said. "It looked like a fuel pump issue, there was no fuel coming to the engine. It’s very painful for the team (and) we need to look into everything.”

The race finished under a yellow flag as Leclerc sent Ferrari's red garage wild with joy.

Hamilton had been lagging way behind in fifth when late drama on Lap 46 changed the whole race. Deja vu, perhaps, since late drama ended his 2021 title bid.

This time, Leclerc was leading comfortably from Verstappen when the back of Pierre Gasly’s AlphaTauri car caught fire as he parked it on the side of the track. It was quickly put out and the Frenchman walked away unharmed.

From the safety car restart, Leclerc got away but Verstappen started complaining.

“What is going on with the battery?" he asked.

His team told him it was fine, to which Verstappen barked back: "No it is not.”

With the Red Bulls out, George Russell moved up into fourth to give Mercedes another bonus.

But Mercedes knows the car was slow until Gasly's misfortune — Hamilton was more than 30 seconds behind Leclerc at one stage and finished almost 10 seconds back — so will not get carried away.

“We are grateful for these points,” Hamilton said. “It is not going to be a quick turnaround.”

It was perhaps a fittingly ironic way to start the season.

Verstappen won the F1 title following a restart under a safety car, just when Hamilton was cruising to what would have been a record eighth title.

The controversial restart cost race director Michael Masi his job, led to endless analysis, and took governing body FIA from Dec. 12 to the eve of this race to conclude “human error” by Masi.

Red Bull celebrated that December night in Abu Dhabi, then Mercedes lost both appeals and Red Bull started in dynamic form as Verstappen led preseason testing. He lined up second behind Leclerc for Sunday’s race with Perez starting from fourth and the team expecting a healthy haul of points.

“The biggest problem is that we scored zero points with a competitive car,” Verstappen said.

Sweet revenge for Mercedes perhaps as team principal Toto Wolff smiled from the side and probably not only because of Hamilton's unexpected podium.

But also unbridled joy for Ferrari.

“That’s exactly how we should start the season,” Leclerc screamed on radio. “Mamma mia.”

It was the team’s first win and its first 1-2 since former driver Sebastian Vettel won the Singapore GP ahead of Leclerc in 2019, and Leclerc’s first since winning the Italian GP in Monza two weeks earlier.

A stylish one, too.

“Pole position, victory, fastest lap, 1-2 with Carlos, we couldn’t have hoped for any better," said Leclerc, who secured a 10th career pole position on Saturday.

As Leclerc celebrates his third career win, the Scuderia's Tifosi fans have something to crow about, while his old karting rival Verstappen will be fuming at his bad luck.

Hamilton knows a little about how that feels.

So does Kevin Magnussen, who was fired by Haas at the end of 2020 as a restructuring took place with a Russian backer and Russian driver. But when Nikita Mazepin was axed, Haas re-hired Magnussen and the determined Dane powered the car into fifth place.

The dramatic ending should take nothing away from Leclerc's superb driving on Laps 17-19.

Three times Verstappen overtook him with his trademark aggressive driving, two of those by diving inside Leclerc on Turn 1, only for the driver from Monaco to add steel to his silk and pass him back quickly to regain the lead.

“I was trying to be as clever as possible, brake early in Turn One and twice it worked out," Leclerc said. “It was nice, on the limit, hard racing.”

The 24-year-old drivers were bitter rivals in their karting days. As Verstappen's rise continued, a dreadful 2020 campaign left the Ferrari’s Tifosi fans in tears and the team in tatters. Last year was stable with a handful of podiums but no wins.

Team hopes will now be raised that this Ferrari is quick enough to compete, especially with Red Bull shelling so many early points.

“Ferrari are properly back with a 1-2, where the team should be,” Sainz Jr. said. “The hard work is paying off and we are there.”

Sainz Jr. joined Ferrari from McLaren, which had five podiums last year, including a win for Daniel Ricciardo.

But as Sainz Jr. celebrated on the podium, Ricciardo was a lowly 14th and Lando Norris was 15th with both McLaren drivers joining Red Bull in the zero points club.