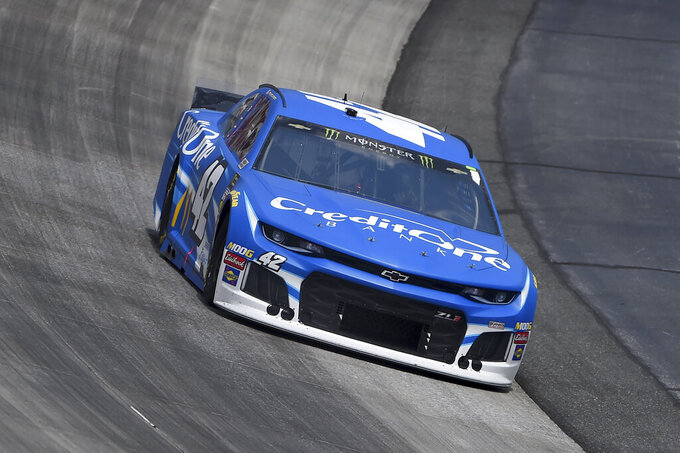 CONCORD, N.C. (AP) — NASCAR will not recommend changes after extensively analyzing how Kyle Larson's car got airborne during a late-lap accident and spin at Talladega Superspeedway last month.

Larson was hit by William Byron's No. 24 car on the final lap of the race. As Larson spun, his back wheels lifted off the ground, the car's nose crashed against the interior wall and started about a half-dozen barrel rolls before coming to a stop. Larson was not seriously hurt.

NASCAR began a breakdown of the accident to see if any alterations to race cars were necessary, senior vice president for innovation and racing development John Probst said Saturday before the NASCAR All-Star Race at Charlotte Motor Speedway.

Probst said NASCAR determined damage to Larson's right front tire due to contact led to the lift off.

"Obviously, cars getting airborne for us is a big deal," Probst said.

Soon after the frightening accident, NASCAR sought all available footage, including data from on-car cameras and monitors, to see if something in the setup helped Larson's car head into the air. Larson's car was destroyed in the accident and could not head to the wind tunnel in Auburn Hill, Michigan, for tests.

Based on routine pre-race analysis, NASCAR believed a car would have to be going 250 mph in order to lift off Talladega's surface. NASCAR's examination estimated Larson was going between 180 and 190 mph when it got airborne.

But the damage to the right front tire reduced the speed necessary for a car to lift off, Probst said. "Our conclusion is the reason the car got off the ground was from the contact from the 24 (car) that led to the spin to the right," he said. Probst said trying to legislate a perfect solution in a chaotic situation like Larson's crash is close to impossible.

Probst and NASCAR worked with Larson's Ganassi Racing Team on the analysis. NASCAR will share the information with other teams this week at its next competition meeting.

Probst praised Larson's measures to protect himself — he pulled in his arms and folded them across his chest — in a difficult spot where there was nothing he could do to impact the car.

Discovering a perfect solution that keeps cars grounded is near impossible, Probst said.

"To get it to where there'd be a zero percent chance of the cars getting off the ground, the cars would be going very slow," he said.