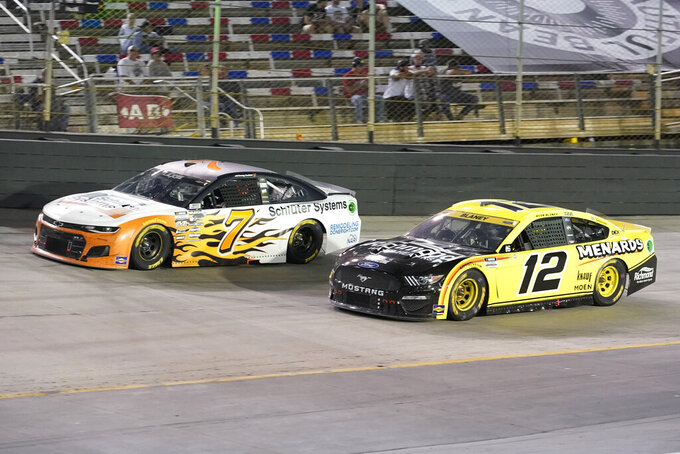 Discussions were underway on who would replace Todd Gordon as leader of the No. 12 Ford when he retires at the end of the season when Penske and executive vice president Walt Czarnecki widened the group to include Blaney.

It was a first for the third-generation racer, who researched candidates and wrote questions in a notebook he brought with him to the interview session.

“I was kind of interviewing people for the job, I've never really been in that spot,” Blaney said. "What I really liked was they sat me down and said, ‘Hey, we want you to be just as much a part of this deal,’ and that made me feel good that I had the input.”

Team Penske and Blaney ultimately chose Jonathan Hassler, a longtime team engineer who in June was named crew chief for Matt DiBenedetto at Penske sister team Wood Brothers Racing. Hassler has led the No. 21 to one top-five finish and five top-10s since taking over that team.

He also filled in for Joey Logano crew chief Paul Wolfe for one race this season, a fifth-place finish at Dover.

“It definitely means a lot when the team sits you down and says, ‘You are looking for somebody next year and you are going to be just as big a part as we are in making the decision and we’re going to get our guys and then we're going to talk about it and make a choice,'” Blaney said. “And at the end of the day it was my choice to have Jonathan and they were OK with that.”

The interview took place in the same room where Blaney interviewed to drive for Penske nine years earlier and symbolized how far he's come with the organization. Brad Keselowski is leaving Penske at the end of the season and the 27-year-old Blaney hopes to assume some of Keselowski's duties as a team veteran and leader.

Blaney himself had never interviewed anyone before — he joked that all his employees are family members and “I already know them pretty well” — and had to figure out what it was he was looking for in a crew chief.

For help, he turned to current crew chief Gordon, who will retire after his 10th season leading a Cup Series team. He led Logano to the 2018 championship, was moved to Blaney's car in 2020 and has totaled 25 Cup victories between the two drivers.

Blaney has a career-best three wins this season and is ranked sixth in the standings headed into Sunday's playoff elimination race on the Roval at Charlotte Motor Speedway. Blaney won the inaugural 2018 race on the hybrid road course/oval and has not finished lower than eighth in three races.

“I talked to Todd and said ‘What do you think are good things to ask?' because Todd knows, he's interviewed people to be on his team,” Blaney said. "There were multiple guys I talked to and yeah, I asked him, really not only about how he goes about his weekend and cars and setup stuff, but also what kind of person he is — you have to get along with your crew chief.

“There's a fine line between being friends with your crew chief and working together knowing you have a job to do.”

All the while Blaney was watching the progression of the No. 21 car since Hassler had taken over. Aside from the uptick in performance, Blaney said he felt he could develop a relationship with Hassler.

“His demeanor and personality is very laid back and calm like Todd, which I think you have to have when the driver likes to get worked up sometimes,” Blaney said. “Sometimes you have to have someone on the box who can calm me down right away and focus on the task at hand. I think he can do that just like Todd.”

Next year will be Blaney's seventh full season in the Cup Series and he and Logano will be expected to be the steady drivers when 23-year-old Austin Cindric replaces Keselowski and Harrison Burton, who turns 21 on Saturday, moves into the Wood Brothers seat.

Until then, he's focused on moving on to the third round of NASCAR's playoffs and a strong final five races with Gordon.

“I'm excited to work with Jonathan, but I'm also excited to finish out the year with Todd and see where we end up,” Blaney said.