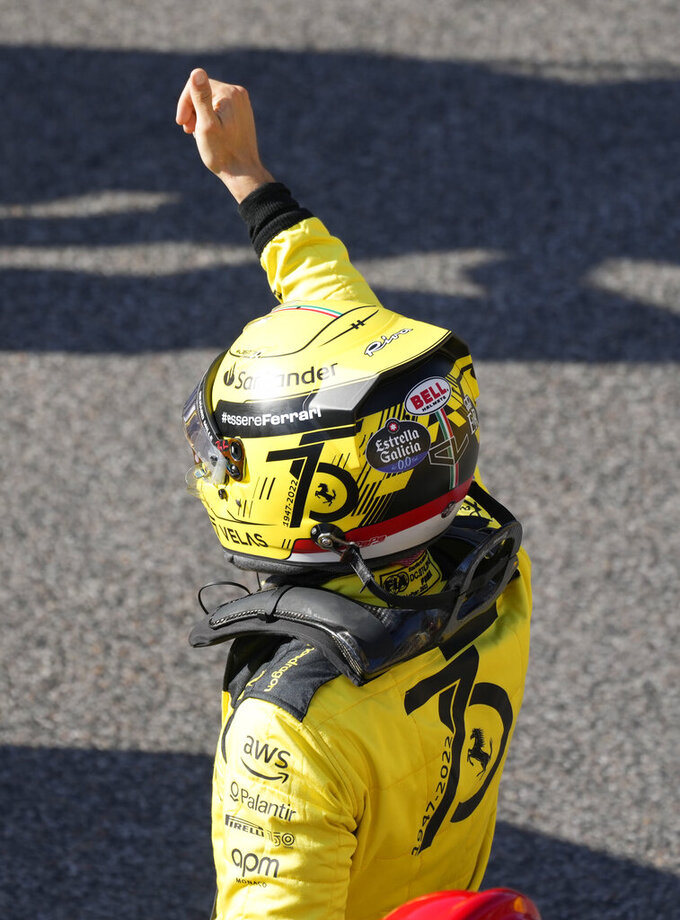 Ferrari driver Charles Leclerc of Monaco celebrates after setting the pole position during the qualifying session at the Monza racetrack, in Monza, Italy, Saturday, Sept. 10, 2022. The Formula one race will be held on Sunday. (AP Photo/Luca Bruno)

MONZA, Italy (AP) — Charles Leclerc will be looking to reignite the Formula One championship race on his home track after clinching pole position for Sunday's Italian Grand Prix.

Runaway points leader Max Verstappen will again have to try and fight his way to the front — although this time only from seventh — after being among the many drivers to be hit with grid penalties.

Leclerc — who said he risked everything at the end — set the fastest time on his last lap in Saturday’s qualifying and knew he would start at the front of the grid even before Verstappen crossed 0.145 seconds slower, meaning the Ferrari driver secured pole on merit and not just because of his rival’s grid penalties.

“How lovely. Now guys, tomorrow,” Leclerc said on team radio in Italian as the roars from the passionate red-clad tifosi fans echoed around the circuit.

Despite starting the season brightly, Ferrari has had a difficult campaign full of errors. Leclerc, who trails Verstappen by 109 points in the standings, admitted it was a “surprise” to top qualifying.

“It feels really, really good,” said Leclerc, who will be bidding to emulate his 2019 Monza triumph. "We still need to finalize this tomorrow otherwise it’s pointless to do the pole on Saturday, but it is a very good surprise today considering where we come from ... we were not expecting to fight for poles here.

“So it’s a very good surprise, at home. Yeah, there’s a special motivation for this weekend. And it’s great that we managed to do a good job today.”

Verstappen is bidding for a fifth straight win and a first-ever appearance on the iconic Monza podium. The reigning champion had a more daunting task at the Belgium GP two weeks ago, when he was again among several drivers to be hit with grid penalties and started 14th but surged through the field to victory.

And the Red Bull driver believes the strategy is simple.

"I just need to have a clean Lap 1, clear the cars in between us quite quickly, and I think we still have a good chance here,” Verstappen said.

Carlos Sainz Jr. was third fastest but he will not start alongside his Ferrari teammate on the front row as he has also been given penalties and will start at the back of the grid, ahead of seven-time world champion Lewis Hamilton and Yuki Tsunoda.

“I will do my best and try to put on a good show ... but I wish I could be there at the front with Charles in order to try and go one-two tomorrow for the tifosi.”

Nine drivers in total received grid penalties. Verstappen’s Red Bull teammate Sergio Pérez finished fourth, ahead of the Mercedes duo of Hamilton and George Russell, but it is Russell who will start alongside Leclerc on Sunday. Pérez will instead start back in 13th.

The McLaren duo of Lando Norris and last year’s Monza winner Daniel Ricciardo make up the second row, ahead of Pierre Gasly and Fernando Alonso.

There was an impressive qualifying debut from Williams reserve driver Nyck de Vries who is stepping in for Alex Albon this weekend after the Thai driver was diagnosed with appendicitis.

The 27-year-old De Vries made it into Q2 — bettering teammate Nicholas Latifi — and was 13th fastest meaning he will start his first-ever F1 race in eighth.