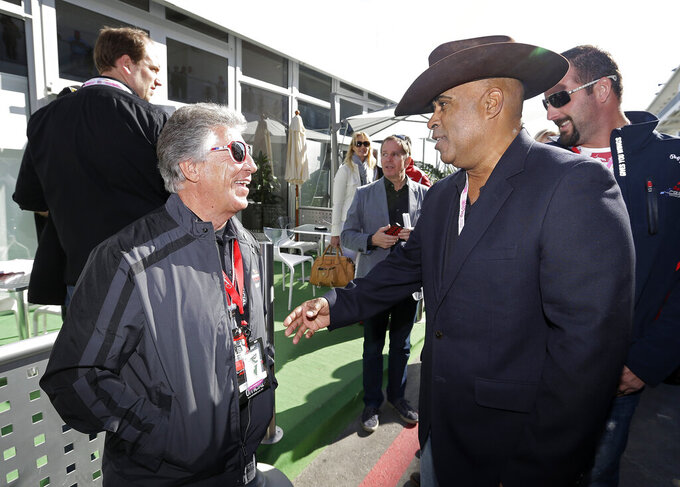 INDIANAPOLIS (AP) — Rod Reid ran a program full of young, Black kart racers locked out of a venue because of the pandemic and needing a track to race.

“We told him what we were about and he was really surprised,” Reid said. “He did not know we existed. The reason we started, especially the idea of exposing the Black community to Indianapolis Motor Speedway, surprised him because he said he couldn’t believe people don’t feel welcome here. I told him, you’re talking years and years and years back to when a person of color couldn’t even go to the speedway.”

“I think the idea that a group of people would not feel welcome in a place he purchased, and a sport he loves, like I do, totally didn’t make sense to him,” Reid said.

Much like NASCAR dealt with its own racial reckoning last year, IndyCar moved to create a more diverse workforce throughout all levels of a series that has had just two Black drivers race in the Indy 500, its showcase annual event that dates to 1911. Willy T. Ribbs became the first Black driver to start the race in 1991 (and again in 1993) and George Mack in 2002 are it.

“Isn’t it sad, all these years and not another Black driver?” Reid said.

The 66-year-old Ribbs, who drives this summer for the Superstar Racing Experience series, said he never cared much for his role as Indy 500 trailblazer.

“It did not matter. I didn’t care about it,” he said. “Still don’t. It meant nothing. I was focused on going fast and trying to win. If you focused on anything other than that when you were there, you were going to get hurt or get killed.”

Jimmie McMillian, chief diversity officer for Penske Entertainment, is the architect intent on designing a new era in the open wheel series. He said members of the Black community who live near IMS treat never having attended an Indianapolis 500 as some sort of badge of honor. They have an up-close look at one of the most famous venues in sports and don’t really see anyone who looks like them, certainly not on the starting grid.

“We tried to figure out why we were so monolithic in our employee base,” McMillian said.

IndyCar’s solution was an attempt to become more aggressive and creative in its outreach efforts -- how does it find the best and brightest in urban communities and persuade them to seek a career inside the paddock. Yes, there was a greater presence on social media and ticket drives, and some of the usual promotional pushes like working with key stakeholders in the community such as the Indianapolis Urban League.

“Someone has to take that first step,” Penske said. “I think in the position we're in, we can be leaders in that area. We're going to continue to do it. We're looking at the people we do business with. The people that we hire. We have a much deeper focus. We have that within our company. But I think from a racing perspective, I think we have that responsibility.”

For McMillian, it was the 1-to-1 connection, the personal stories that could be shared with kids and adults that Indianapolis Motor Speedway was as welcoming to them as any other fan enjoying a pork tenderloin sandwich as cars zip past at 200 mph on race day.

“How successful could you be as a person of color if you don’t see people who are successful?” McMillian asked. “So it’s telling that story and going out to different communities to say, not only do we want you here, but there’s different paths of success for you and your race doesn’t matter. This is a great place to work.”

McMillian changed tires and performed oil changes working at a Bloomington, Indiana, tire dealer in the late 1990s when his co-workers invited him to a NASCAR race at the Brickyard. He was instantly in awe at the scene of packed crowds and fast cars but Confederate flags and “South Will Rise Again” T-shirts made him uncomfortable and sowed doubts about pursuing a career in motorsports.

IndyCar didn’t necessarily have a moment like NASCAR faced last year when Black driver Bubba Wallace led the demand for the stock car series to finally ban the Confederate flag from its races and venues.

IndyCar kept an eye on how NASCAR added minority owners like Michael Jordan and Pitbull, and McMillian said there was even more to study from NHRA: The drag racing series has long been a leader in diversity and essentially made gender, race -- and even socioeconomics -- nonfactors in pursuing a career in motorsports.

That hasn’t always been the case in IndyCar.

With few exceptions for drivers born into legacy families, pursuing a career in racing is as much about sponsorship, cash and connections as talent, and the hustle is part of the job. IndyCar took a deeper look at identifying businesses willing to support developmental teams or help in securing equipment for up-and-coming programs. That also means developing a career path in racing for women and minorities in a variety of jobs outside the cockpit ranging from race engineers to public relations and sponsorship selling and beyond; Reid is a former member of the whistle-blowing, yellow-shirted security team.

“Some people say having a driver in a car is going to make all the difference in the world but if you listen to Lewis Hamilton, he’s very adamant about the fact that when he gets out of the car and goes to the Mercedes paddock, all the faces don’t look like him," McMillian said, referring to the seven-time Formula One champion, who is Black. "His success has not changed that. I have the same concern, quite frankly, that if we were successful enough to have the Lewis Hamilton of IndyCar, that alone would not be the thing we need to really bring the change into the sport that we need.”

Penske is engaged at every level and, yes, diversity can be good for the bottom line, but he has taken a hands-on approach with ideas that could spark fundamental change in the sport.

“He says, what can we do, let’s get it done,” McMillian said.

“They said, ‘I didn’t know so many Black people came to races,’” he said. “The narrative now is, there are a lot of Black people here. We have to make sure all the folks in our community, for one reason or another can say, ‘I’ve been to the track.’”