Ferrari's Leclerc looks to 2023 in last races of F1 season 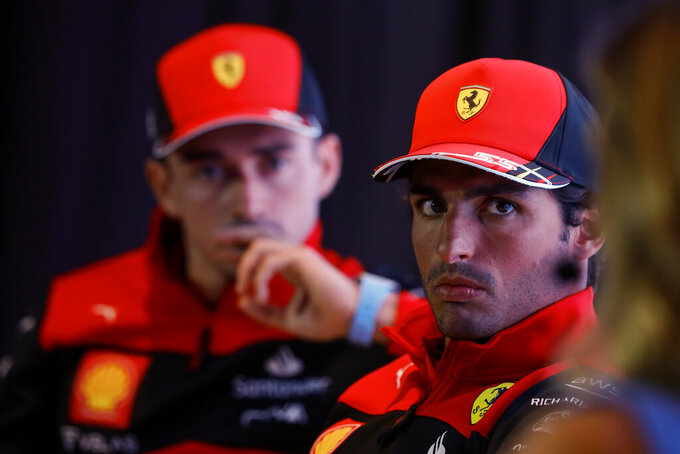 SAO PAULO (AP) — Ferrari’s Charles Leclerc said on Wednesday he will be competing with 2023 in mind during the final two races of the Formula One season.

The next race will be this weekend at Interlagos in Brazil and the final one at Abu Dhabi on Nov. 20.

The 25-year-old Leclerc has three wins and 10 podiums this season. He’s third in the championship after the Red Bulls of defending champion Max Verstappen and Sergio Perez, respectively.

Asked at a media event in Sao Paulo whether he is looking forward to challenging Perez for second place in the drivers' championship, Leclerc replied: "My mind is mostly focused on next year.”

“It is hard to predict exactly what will happen next year, and we will not keep focusing on others. I think it is clear for us as a team which areas we need to improve,” Leclerc said. “We will focus on that and on being a better team. And then I hope we beat anyone next year, no matter if it is Mercedes or Red Bull.”

Leclerc, who is five points behind Perez, added he and Ferrari will do “everything to try and get the best results possible for the last two races.”

“But the most important is to try to build on these last two races in order to be a better team next year,” he added.

Ferrari is second in the constructors’ championship, 209 points behind champions Red Bull and 40 ahead of Mercedes.