F1 chairman evokes "remote" possibility of no races in 2020 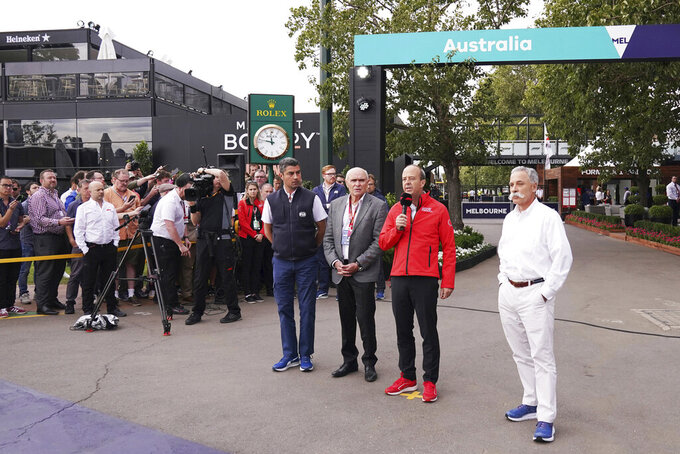 PARIS (AP) — Discussions to host Formula One races in July are at an advanced stage, although F1 chairman Chase Carey cautions that “the remote possibility of no racing in 2020" remains.

The first 10 races of the season have been postponed or canceled amid the coronavirus pandemic, leading to a huge loss of revenue. The iconic Monaco Grand Prix was scrapped for the first time in 66 years.

Figures released by F1 owner Liberty Media showed first-quarter revenue of $39 million compared to $246 million for the same period last year. F1 has a debt of $2.9 billion, which has been offset by producing extra liquidity through internal transactions.

The financial hit is magnified because the season-opening Australian Grand Prix and the Bahrain GP were not held in March — meaning no commerce from tickets or revenue from broadcasting rights.

“We’re actively engaged with lenders of a revolving credit facility," Carey said during a conference call Thursday with investors. “They’ve been very supportive as we work together to identify potential changes ... to enable us to navigate through the potential scenarios, including the remote possibility of no racing in 2020.”

Carey said F1 has furloughed over 50 percent of its workforce, while teams are working together to further reduce F1's budget cap. The cap for teams was already slashed to $175 million for 2021.

“We now expect to move forward with a significantly lower cap,” for next year, Carey said.

Several reports put that figure at $145 million but teams have yet to agree — with McLaren pushing for a far lower figure but Ferrari worried that dropping to $145 million will heavily impact its workforce.

This year's F1 car models will also be kept for 2021, thereby saving on development costs.

To gain lost racing time, F1 has already extended its factory shutdown period from 35 to 63 days, effectively allowing the season to run continuously as from July.

To maximize the European swing, F1 is envisaging holding races at tracks not currently on the calendar. Among those reportedly being considered are Hockenheim in Germany — where the soccer season is resuming — the Imola track in Italy and Portugal’s circuit in Portimao.

“We’re in discussion with all of our promoters, as well as some tracks that are currently not on our 2020 calendar, to ensure we explore all options," Carey said. “We have two primary challenges: identifying locations where we can hold the race, and determining how we transport all necessary parties and their equipment to that location.”

The British GP could possibly follow Austria on July 19, with back-to-back races at Silverstone.

The season could then continue later in the summer in Hungary, where the Hungaroring circuit is nestled in the countryside outside Budapest; and Belgium, whose Spa-Francorchamps track is within the Ardennes forest.

The idea is then to move into Eurasia, Asia, and the Americas before concluding with Bahrain and Abu Dhabi in the Gulf.

“We feel increasingly positive about the number of locations that will be able and want to hold a race this year," Carey said. “We hope to be able to allow fans to attend in the latter part of the year.”