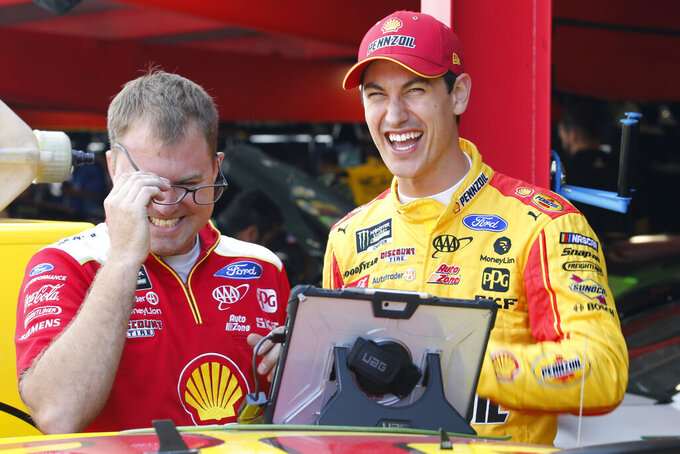 MARTINSVILLE, Va. (AP) — Chase Elliott had just one plan after his engine failed in the opening minutes of practice for the playoff race Sunday at Martinsville Speedway.

"It's pretty simple, we need to try to win," NASCAR's most popular driver said.

The engine made by Hendrick Motorsports failed just five laps in to the first of Saturday's two practice sessions for the opening race in the third round of NASCAR's playoffs. Elliott was pragmatic as the No. 9 team made the engine change that will send him to the back at the start of Sunday's race.

Elliott is now susceptible to dropping a lap down at NASCAR's shortest track if his Chevrolet is not perfect at the start. The paperclip-shaped 0.526-mile oval takes under 20 seconds per lap, and the leaders could be on Elliott's bumper in no time.

"We broke a motor there, five laps in, and yeah, unfortunate way to start the day and it is what it is at this point," Elliott said. "Starting in the back will be unfortunate in the first stage, but there's nothing I can do now."

Elliott completed 58 laps in the second and final practice session before Saturday afternoon qualifying, then later redeemed his day by qualifying second behind Denny Hamlin. Although Elliott will forfeit that starting positon, he still got second choice of pit stall and that positioning should aid his efforts to salvage a strong finish.

The round of eight began with strategical changes from Team Penske, which swapped the over-the-wall pit crews for contender Ryan Blaney and Brad Keselowski, who was eliminated last week. The jackman from Blaney's crew went to reigning series champion Joey Logano. The jackman was part of Logano's race-winning, championship-clinching team at Homestead-Miami Speedway last year.

"We had a rookie jackman this year who has made a lot of good gains over this season, but I feel the opportunity to put basically the same team together that won the championship last year for the next few races, I think was a smart play," Logano said. "We definitely needed some speed from the pit crew side of things and putting the band back together from where it was last year when we won the championship makes sense, so I was on board with that."

Kevin Harvick felt the lingering effects from Stewart-Haas Racing's poor weekend at Kansas, where the No. 4 Ford failed inspection three times and was issued a 30-minute practice hold Saturday. It gave the team time for just 25 laps in the morning during an abbreviated two-day NASCAR weekend. He was also the lowest qualifying playoff driver at 22nd.

Logano led the first practice session, but he was followed by the trio of title threats from Joe Gibbs Racing. Martin Truex Jr. and Hamlin were second and third, while Kyle Busch was fourth as the Toyotas continued to be among the best every session. Hamlin is a five-time winner at Martinsville, and his victory last weekend at Kansas was his fifth of the season.

The Gibbs group is heavily favored to gobble up a slew of positions in the final four championship race next month at Homestead.

"There's not really any weakness I see in our team at this point," Hamlin said. "It's just the unknowns that can take you out, and I can't control the unknowns.

But Busch was a bit prickly Saturday and has seemed resigned to luck, not skill, playing too heavy a role in the championship. He predicted Sunday will come to a final chaotic restart, with all racing respect disregarded. The regular-season champion has had a mediocre playoffs and his mood has echoed his performance.

"With just respect to late in the race coming down to late restarts ... nobody has any care for anybody else at that time and you just run over anybody you can run over," Busch predicted of the Martinsville finish.

As for his approach?

"Whatever comes up next, tackle it when it gets there," Busch said. "What are you going to do? I can't tell you that I'm going to have a perfect race and everything is going to be clean and I could go out there and win Martinsville. If we could, let's go home. You just have to tackle it as it comes against you and deal with it then."

The contenders to Gibbs are Logano — who took the title away last year in an upset partly because he advanced into the finale via his victory at Martinsville — Penske teammate Blaney and 2014 champion Harvick for Ford.

The Chevrolet group is led by Elliott but includes dark horse Kyle Larson, who believes if he can earn his way into the field for the Nov. 17 finale, he will give Chip Ganassi his first NASCAR championship. Larson confirmed Saturday he has been racing with a fractured rib since his crash two weeks ago at Talladega Superspeedway.