With champs in tow, Gibbs stands tall as class of NASCAR 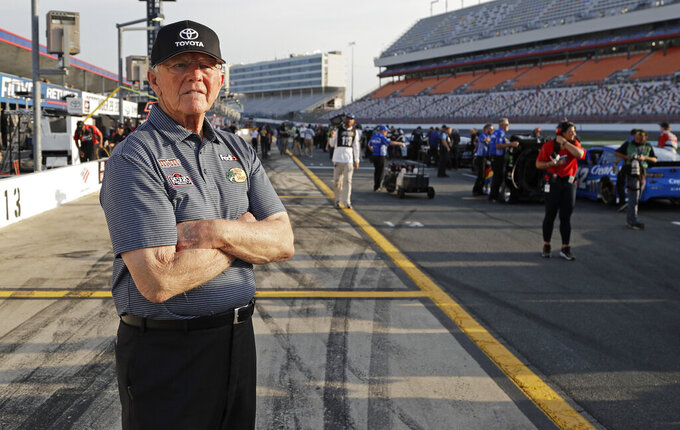 DAYTONA BEACH, Fla (AP) — Joe Gibbs was trying to apologize. His driver won another checkered flag at Daytona — the same track where Gibbs' eponymous race team is the defending Daytona 500 champion — and the 79-year-old wanted to make some things right.

He was eight days removed from giving his NASCAR Hall of Fame speech, and it seemed sitting behind another podium was the perfect setting to thank a few more people he forgot to mention at the ceremony.

"I really messed up on at that speech, the acceptance speech," said Gibbs, who then acknowledged business partners, friends of his late son, J.D., and vowed to scores of others he omitted: "I'm going to try to take care of that."

Gibbs could be forgiven for the lapse on such a busy weekend. He was feted in Miami during the Super Bowl as part of the NFL's 100 All-Time Team, trading a NASCAR blue blazer on a stage in Charlotte, North Carolina, for a maroon "100" jacket a little less than 48 hours later. No one had a better weekend than the dual Hall of Famer 24 years apart.

NASCAR's Hall of Fame is filled with drivers, mechanics and crew chiefs, but Gibbs gave the hall its first coach. More like Coach. It's what everyone calls him, from drivers to journalists, a nickname as synonymous with Gibbs in the sport as much as The King is paired with Richard Petty.

On Daytona 500 weekend, he's at the top of the industry — he boasts the Daytona 500 champion (two-time winner Denny Hamlin), the reigning Cup Series champion (Kyle Busch), a seven-time winner in 2019 (Martin Truex Jr.) and the driver who made him the winningest owner in Busch Clash history with nine (Erik Jones). Joe Gibbs started his race team in 1992 and it controls NASCAR much the way his "Hogs" with the Washington Redskins controlled the line of scrimmage — just try and get past them.

Forbes valued Joe Gibbs Racing at $230 million, behind only Hendrick Motorsports at $315 million.

"To win a Daytona 500, a championship, everything that went in between, that's just really hard in pro sports," Gibbs said. "But being realistic about it, I don't think many people would give us odds to be able to duplicate that."

Actually, Hamlin (+800) is the favorite to win Dayona, and Busch and Truex are both +500 favorites to win the championship.

Hall of Fame driver Dale Jarrett won Gibbs his first Daytona 500 in 1993, the first of 176 Cup victories for the Gibbs team. JGR won a modern-day record 19 of the 36 Cup Series races in 2019 and made Toyota a regular in victory lane.

His drivers say their prosperity starts with Gibbs, how he counsels, develops talent, surrounds his drivers with the best crew in their field to succeed or even, as Hamlin put it, "He finds a way to intimidate you even though he's not an intimidating guy."

Gibbs, who won three Super Bowls coaching the Washington Redskins and five more titles at JGR, demurred when it came to taking credit for JGR's growth into a NASCAR juggernaut.

"Yeah, you have a role in it, you fight hard, you try to do what you can do to help the team, but there's so many people that put our race team where it is," Gibbs said. "Certainly, I was just a part of it. I get shoved up front, get an award and all that. When I reflect on it, it's all the people that put you there."

Look no further for proof than Gibbs' Hall of Fame class and his current roster.

He was inducted alongside Tony Stewart and Bobby Labonte, two drivers who built the foundation at JGR and proved to doubters that racing wasn't just a silly dalliance for Gibbs. Hamlin is a Gibbs lifer, Busch has won two titles and surged into the conversation as one of NASCAR's greats under Gibbs' watch, and Truex will likely cap a Hall of Fame resume driving for Gibbs.

"He's not one of those guys that sits at home, just hangs out and does chores around the house," Hamlin said. "He likes to work hard. That really is, in my opinion, the difference in him and any other team owner, is that he's at the race shop every single day at 8 a.m. calling sponsors, walking down the shop, figuring out how we can be faster."

Gibbs may have forgot a few names during his Hall of Fame speech. But it's a certainty that Coach will be name dropped by scores of his drivers in speeches to come.

"He's been there with me and for me every step of the way," Busch said. “We've kind of had this bond, this relationship that he and I have had the utmost respect for one another, and it's turned into this.”