Blaney wins at Atlanta after Larson fades on old tires 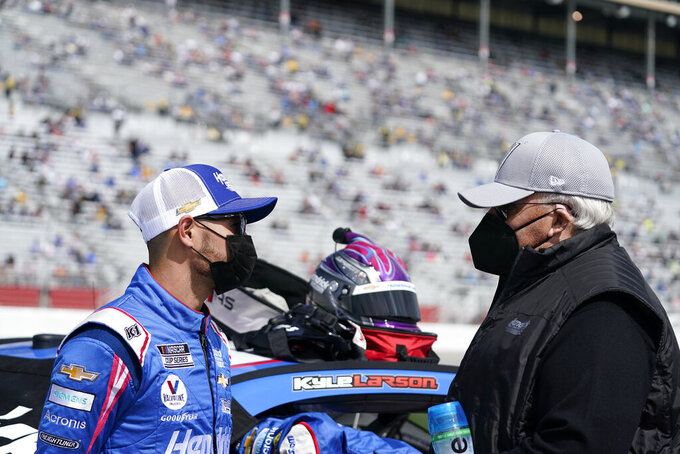 Patience was the key, especially on a day when Larson looked unbeatable.

In the end, Larson faded on an battered set of tires, and Blaney raced by him for an improbable victory Sunday.

“I was not going to be able to stick with him,” Blaney said. “I've got to save my tires ... and see what happens.”

Blaney became the sixth driver to win in six races to start NASCAR's Cup season, surging to the front with nine laps to go after Larson easily won the first two stages and led 269 of 325 laps on the 1.54-mile trioval.

Larson's tires didn't stand up to the punishing track after making his final pit stop with 56 laps to go.

Blaney stayed close enough to make his move, hugging the outside wall through the fourth turn and cutting to the inside to pass Larson as they crossed the line in front of the main grandstands.

Blaney pulled away to win by 2.083 seconds in his No. 12 Team Penske Ford, having gone just as long as Larson on the final set of tires but getting much more out of them.

“It's cool to win at a place where you've got to finesse it a little bit and think about it," Blaney said after his fifth career victory.

He led just 25 laps, but was out front for the one that mattered.

When it was over, Blaney strolled over to the stands and grabbed the checkered flag, which he handed to a young fan wearing the driver's T-shirt.

It was a bitter loss for Larson, who missed a chance to become 2021's first two-time winner after a victory at Las Vegas two weeks ago.

Still, he is off to a strong start in his new job at Hendrick Motorsports, less than a year after blurting out a racial slur on the livestream of a late-night video racing game, which cost him his job at Chip Ganassi Racing.

“I hate to lead a lot of laps and lose," Larson said. “The car was stupid fast for a long time there.”

The Cup series returned to the track where the racing world came to a halt a year ago.

In March 2020, Atlanta was the first NASCAR Cup race to be postponed because of the coronavirus pandemic.

This time, the race went off as scheduled before a socially distanced crowd of about 20,000 — far below capacity because of the lingering COVID-19 outbreak, but a welcome change from last June when no fans were allowed for Atlanta's makeup race.

The Cup series will be back July 11, the first time since 2010 that Atlanta has hosted two races in a season.

Pole-sitter Denny Hamlin continues to lead the season standings after another strong run. He was fourth behind Blaney, Larson and Alex Bowman.

Hamlin has finished in the top five in every race but Homestead, where he was 11th.

Stewart-Haas Racing is off to a tough start in 2021.

Kevin Harvick, who had won two of the last three races in Atlanta, was never in a mix after having to make an extra pit stop early on to change a flat that resulted from a broken tire stem.

He did battle back for a 10th-place finish.

The other Stewart-Haas drivers were even farther back: Cole Custer 18th, Aric Almirola 20th and Chase Briscoe 23rd. None has cracked the top 10 this season.

Kurt Busch had the look of a contender until the restart to begin the second stage.

As the cars stacked up behind Larson, Busch got bumped from behind by Hamlin and slammed into the outside wall going into turn one, sustaining heavy damage that ended the No. 1 Chevy's day.

Busch conceded that Hamlin “didn’t do anything vicious or malicious,” but he was still ticked off.

“These are the days that hurt the worst,” said Busch, who finished last in the 39-car field. “It’s a restart. Where are we gonna go, man? Just chill.”

It was also a tough day for defending Cup champion and home-state favorite Chase Elliott.

Scheduled to start from the fifth position, he had to take the green from the back of the field after failing multiple inspections before the race.

Then, shortly after a restart to begin the final stage, Elliott’s No. 9 Chevy blew the engine coming off turn four. The car was pushed to the paddock with a 38th-place finish.

The series heads to Bristol Motor Speedway next Sunday for the highly anticipated dirt race on the half-mile oval.

It will be the first dirt race for NASCAR’s top racers since 1970 — two years before a revamp of the series led to what is known as the modern Cup era.