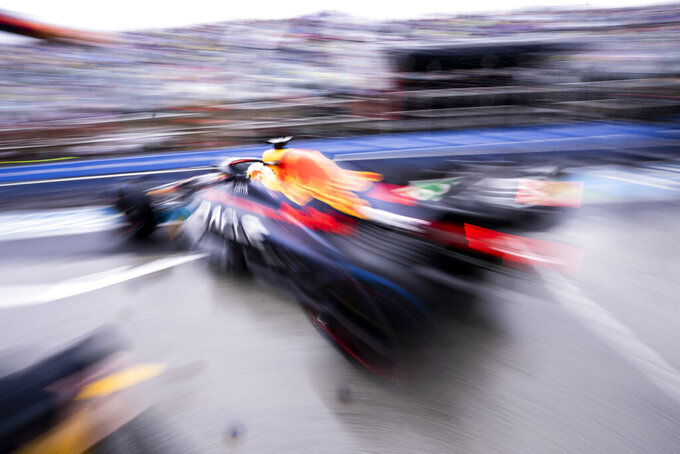 Red Bull Racing Max Verstappen of the Netherlands drives out of his garage during the third practice session at the Formula One Canadian Grand Prix in Montreal, Saturday, June 18, 2022. (Paul Chiasson/The Canadian Press via AP)

Formula 1 is close to renewing its United States broadcast rights with ESPN — for an exponentially higher price — but the sides have not finalized a deal, according to two people with knowledge of the negotiations.

The sides are working on a three-year contract, the people said. Although the numbers have not been finalized, ESPN would pay something in the range of $75 million to 90 million per year, one of the people said. The people spoke to The Associated Press on condition of anonymity because they weren't authorized to discuss financial matters and the contract is still being negotiated.

ESPN did not pay any rights fees in 2018 when NBC Sports Group dropped F1 after five seasons, leaving the series without a U.S. home.

ESPN has paid $5 million per year from 2019-22, meaning the price tag to keep F1 will be up to 18 times higher. Ratings have dramatically improved over the past five seasons as the sport's popularity grows stateside.

Sports Business Journal first reported over the weekend the two sides were closing in on a deal.

Netflix — which has aired four seasons of the “Drive to Survive” documentary series about F1 — expressed interest as well as Amazon and Comcast. Before going to ESPN, races had aired on NBC and NBCSN from 2013-17.

The May 8 Miami Grand Prix averaged 2.6 million viewers on ABC, a record audience for a live F1 telecast in the U.S.

Through this season's first nine races, F1 on ESPN and ABC is averaging 1.3 million viewers, a 40% increase over last year's season-long average of 949,000, which was the most-viewed season on U.S. television.

There will be at least five races in North America next year, including Miami, Austin and a new event in Las Vegas.

F1 isn't the only racing series that has seen ratings increases this year. Fox and FS1 has averaged 3.70 million for its 14 NASCAR races, a 6% jump over 2021. The IndyCar series is up 5%, averaging 1.72 million on NBC, Peacock and USA Network.