Verstappen takes the pole in Japan with season title in view 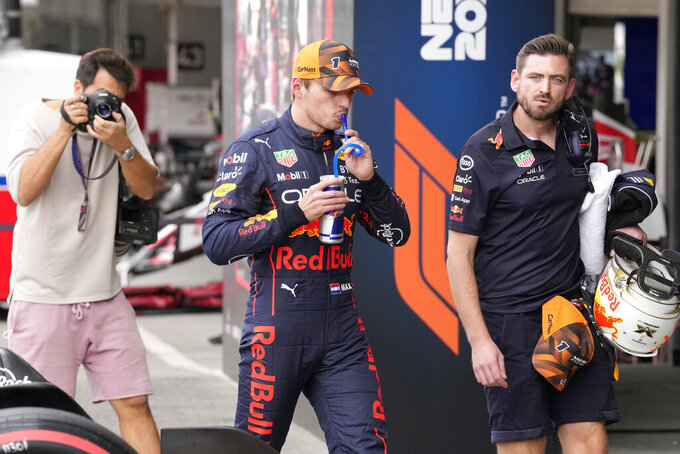 Red Bull driver Max Verstappen of the Netherlands drinks after the qualifying session of the Japanese Formula One Grand Prix at the Suzuka Circuit in Suzuka, central Japan, Saturday, Oct. 8, 2022. (AP Photo/Eugene Hoshiko)

SUZUKA, Japan (AP) — Max Verstappen of Red Bull will be on pole position for Sunday's Japanese Grand Prix as he attempts to clinch his second straight Formula One drivers' title.

It was Verstappen's fifth pole of the season. However, that has not been crucial for Verstappen, who has won 11 times this season — often starting from a non-pole position.

Verstappen finished first in qualifying on Saturday with a quickest lap time of 1 minute, 29.304 seconds at Suzuka. He was followed by Charles Leclerc of Ferrari, Carlos Sainz of Ferrari, and Red Bull teammate Sergio Perez.

Verstappen is guaranteed of taking the season title if he wins the race on Sunday and also gets a bonus point for turning the fastest lap. He could also win the championship for a second straight year without a victory depending on the other results.

“I’m not thinking about it too much,” Verstappen said as he talked about Sunday. “I'm just taking it day by day. I think what was more important is that we have a competitive car — and clearly we had that today in qualifying. And of course it’s going to be the same tomorrow in the race.”

Even if he fails, Verstappen is likely to take the title in two weeks at the United States GP in Austin, Texas. He has a massive 104-point lead over Leclerc with five races to go, including Sunday's race.

He's also 106 points ahead of teammate Perez, the only other driver who has a mathematical chance to overtake him for the season title.

Verstappen has had a dominating season. He's already won 11 times, and if he gets two more he will match a season record for victories held by Michael Schumacher and Sebastian Vettel. They both won 13 in one season.

Saturday qualifying was run on a dry circuit. However, rain is predicted for Sunday in central Japan. Those were also the conditions in Friday practice.

Race stewards later looked at an incident in the third practice session involving Verstappen and Lando Norris of McLaren. Norris was forced to swerve to avoid hitting Verstappen. Stewards gave Verstappen a reprimand but he kept pole.

Sunday's race result could be quickly overshadowed on Monday when the FIA — the governing body of Formula One — is expected to rule if any team violated spending-cap rules last season.

Unsourced reports say Red Bull is one of the teams under investigation.

The FIA could put financial sanctions on a team or, in theory, could also strip Verstappen of the title he won last season in the final race of the season. That seems unlikely and could be a public relations disaster.