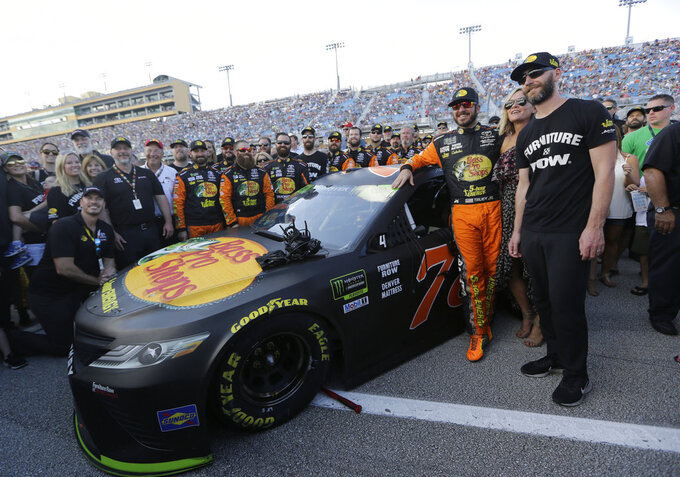 Truex was in prime position to repeat his Cup Series title at Homestead-Miami Speedway on Sunday until a late caution ruined the night and left Truex wondering what might have been.

His planned goodbye bash turned into a pity party.

Truex took the lead by passing fellow contender Kyle Busch on a restart after a final round of pit stops. He thought he had the fastest car and would drive away in his Toyota, but Joey Logano passed him three laps later and pulled away for the victory.

Truex could have retaliated and wrecked Logano as Logano made the winning pass Sunday, but Truex instead took the high road.

"He was so much faster than me at that point," Truex said. "If I would have hit him, he would have just hit me back and went on. It was moot point. I needed to be faster. It wasn't even close at that point in the race. Hell, he passed me so fast I didn't even have a chance to do anything."

So he drove the final laps watching Logano pull away.

Truex felt even more disappointment when he returned to the pits and his Furniture Row Racing crew.

The one-car team based in Denver — far removed from NASCAR's North Carolina roots — is closing its doors after a 14-year run in which it morphed from an underfunded also-ran to a NASCAR champion last season with Truex behind the wheel.

FRR employees, including crew chief Cole Pearn, choked back tears at the shop this week when the No. 78 Toyota was loaded into the hauler for the finale. They hugged, snapped group photos and filmed the hauler as it started the 2,100-mile ride to Homestead.

Truex wanted to deliver the ultimate parting gift with a second series championship in as many years.

Truex and FRR accomplished what no other single-car team has done in the current championship format. They went head-to-head and beat the heavyweight teams owned by Rick Hendrick, Roger Penske and Tony Stewart. They forged a hasty relationship born out of necessity, and it soon turned into a fruitful partnership both sides wanted to continue while chasing championships well into the future.

But once 5-hour Energy, which plans to leave NASCAR at the end of the season, pulled its funding and no other sponsorship could be secured, owner Barney Visser pulled the plug on the organization.

"To go from a two-race winner to a 19-race winner, a championship, fourth in points, a second in points, it's just been amazing," Truex said later. "Everything about it has been great. Everything about it has been the best thing I've ever been a part of. You know, I feel good about my future and going to a great place, and I know we'll have more success. But it's going to be different. It's going to be a different team, a different cast of characters. These guys were a special group, and I'm very thankful to get to work with all of them."

Truex, Pearn and a few crew guys will stay together as they move to Joe Gibbs Racing next season. But what they accomplished in 2017 — and how close they came to another one in 2018 — will stick with them forever.

"Just proud of the effort," Pearn said. "To go out that way and have a car capable of winning the championship and be that close is something you've got to be proud of. That's racing. That's this format. It's a matter of how it shakes for you. Last year, it shook out for us and this year it didn't. Still, we did a great job."