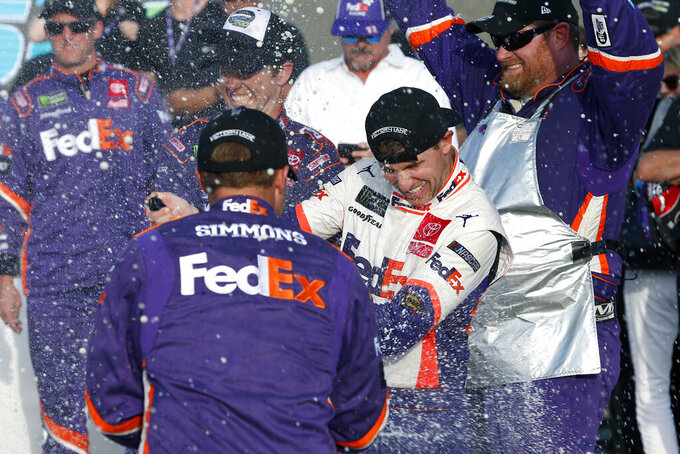 HOMESTEAD, Fla. (AP) — As Denny Hamlin angrily tried to charge after Joey Logano in a post-race fracas, only one person was able to calm the driver.

It was Chris Gabehart, same as it has been all season.

Hamlin had been tossed to the ground by a Logano crew member at Martinsville last month, and after scrambling to his feet he had to be restrained from chasing after Logano. Gabehart placed his arm around Hamlin’s neck, then used his other hand to turn Hamlin’s chin and force Hamlin to look into his crew chief’s eyes.

The message was unmistakable: They have a championship to win and Gabehart will not allow Hamlin to throw this chance away.

Hamlin’s stirring run from a winless season to a win away from the title has been overseen by a demanding and no-nonsense crew chief who happens to be a rookie at the job.

“At any point in time this year with the position that Denny was in, it would have been very easy for him to keep his thumb on me and make sure this rookie doesn't get out of line,” Gabehart said. “I never got any of that out of Denny, not one time. He understands that my job is to lead. If he second guesses me, that's only going to be bad. It creates doubt, uncertainty. He gave me the leash I needed to get going. Quickly, we all marched in the right direction.”

Gabehart is a former late model driver who found work with Kyle Busch and worked his way through the ranks as an engineer into Joe Gibbs Racing and, ultimately, became crew chief for Hamlin. The pairing of the two 38-year-olds began during a period of mourning for the organization following the January death of team co-chairman J.D. Gibbs, who had discovered Hamlin around 2004. Along with longtime sponsor FedEx, the younger Gibbs was among Hamlin’s biggest supporters.

But Hamlin was winless in 2018 and yet another crew chief change was needed. He knew he was potentially vulnerable because of Gibbs’ deep development system and the team’s never-ending need for open Cup Series seats. Hamlin understood it was time to perform.

“If you go through a whole year like (Hamlin) did last year and not win a race and ... the rumors start. Is this guy over the hill?” Gibbs said. “I think Denny was fighting through that, saying that's not the case. I think Chris came on board and I think Chris really helped because Chris has a different outlook on things.”

It didn’t hurt that the duo won their first race together — the showcase Daytona 500 to open the season — and have followed it with a strong run to the title race. Hamlin has twice before been in title contention during the season finale, and twice lost the championship. Both defeats were mortifying to Hamlin and deeply damaged his psyche, but he’s a far different person this time around, his first shot at a title since 2014.

What used to be viewed as a cocky confidence is now just confidence for a driver convinced he can finally win his first title. He races JGR teammates Busch and Martin Truex Jr., as well as Kevin Harvick of Stewart-Haas Racing on Sunday for the championship. Hamlin has made a concerted effort to, well, finally grow up and act like an adult and it has been evident all season and as he closes in on his 39th birthday Monday.

He openly acknowledges the personal journey he’s taken and credits his off-track growth for his on-track success and six victories, including last week’s must-win statement victory in Arizona that advanced Hamlin into the championship four.

Behind the scenes is Gabehart, who is has kept Hamlin on a very tight leash. Gabehart has been able to manage Hamlin’s emotions during a race and makes almost all the pit calls for the No. 11 Toyota. And when Hamlin was facing elimination and telling reporters he would still be satisfied with the season even without a championship, Gabehart texted him and told him to knock it off.

“I think he brings out the best in me. That is absolutely for sure,” Hamlin said. “I always think about every time I suit up or I get in the race car, I buckle in, he comes to the window and talks to me ... a speech to pump me up. He never is short of motivation. I think that's really one of his strong suits. You hear it on the radio, too, right? Kind of never lets me get out too far one way. He guides you back in the lane.”