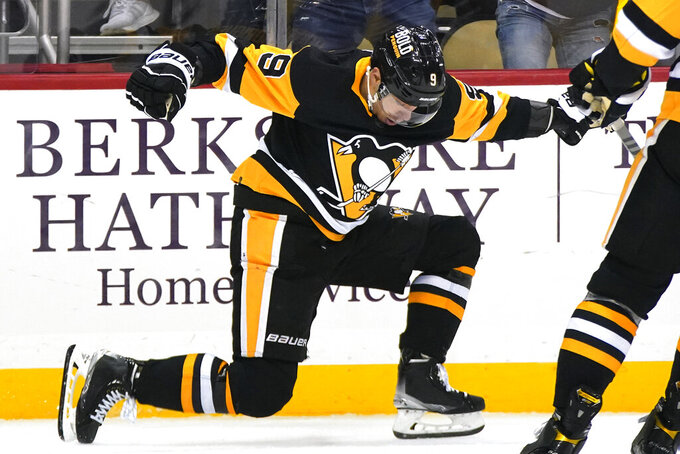 BOSTON (AP) — The owners of the Boston Red Sox are in talks to buy the NHL's Pittsburgh Penguins.

Red Sox President Sam Kennedy confirmed on Wednesday that Fenway Sports Group, which owns the Major League Baseball team as well as Liverpool FC of the Premier League and is partners in the RFK Racing NASCAR team, has been working on a deal for the professional hockey club. The talks were first reported by Sportico.

Kennedy declined to elaborate on the terms of the deal. A Penguins spokeswoman did not respond to an email seeking comment.

FSG has been looking to add another major sports franchise to its portfolio.

This spring, it brought on as an investor Los Angeles Lakers star LeBron James, who has said he ultimately wants to own an NBA team. FSG received a reported $750 million investment from RedBird Capital Partners in March that valued the sports conglomerate at $7.35 billion.

One of the NHL's 1967 expansion franchises, the Penguins were bought out of bankruptcy by Lemieux and investor Ron Burkle in 1999 for $85 million and transformed into one of the NHL’s most successful franchises.

Under their ownership, the team won the Stanley Cup three times while also building a new stadium in downtown Pittsburgh to replace the Civic Arena that was at the time the oldest home building in the NHL.

They have reached the playoffs in 15 straight seasons, but they have only won one series since the second of their 2016-17 back-to-back championships. Two-time MVP Sidney Crosby, 34, has missed all but three of the team's first 15 games in his 17th season, and the team was seventh in the eight-team Metropolitan Division.