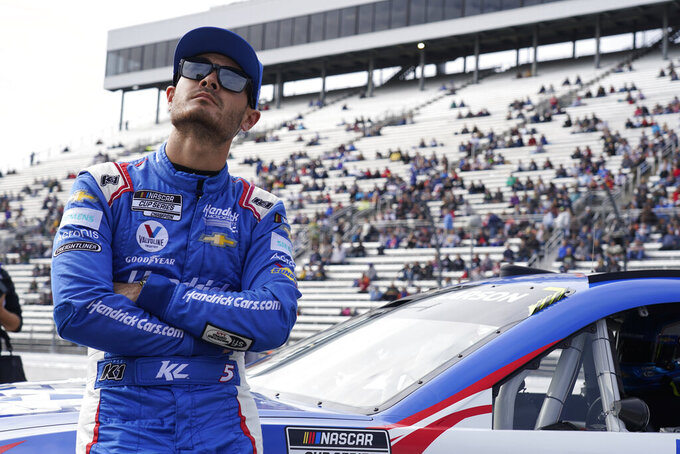 Kyle Larson, left, watches a monitor of other cars qualifying as he stands by his car before winning the pole position for Sunday's NASCAR Cup Series auto race at Martinsville Speedway, Saturday, Oct. 29, 2022, in Martinsville, Va. (AP Photo/Chuck Burton)

MARTINSVILLE, Va. (AP) — Kyle Larson will start on the pole in Sunday's race at Martinsville Speedway.

Larson turned a fast lap at 96.078 miles per hour, edging Chase Elliott for the top spot. Elliott's lap came at 96.019 mph, putting the last two NASCAR Cup Series champions on the front row for the last race before the four-driver field is set for the championship.

Elliott remains a contender for his second title. Larson has been eliminated.

Larson, who won the championship last season after winning 10 races, posted his third victory of the season last weekend at Homestead-Miami Speedway. He was eliminated from the championship in the second round at the road course in Charlotte.

“Yeah, three more points would be good, but I honestly don’t lose any sleep about it. I’ve got one championship under my belt and going for another one these next couple of weeks. I feel like going for an owner’s title is really what’s important,” Larson said.

The remaining top five includes Chase Briscoe, Ryan Blaney and Cole Custer. Only Custer is among those not in contention for the season championship.