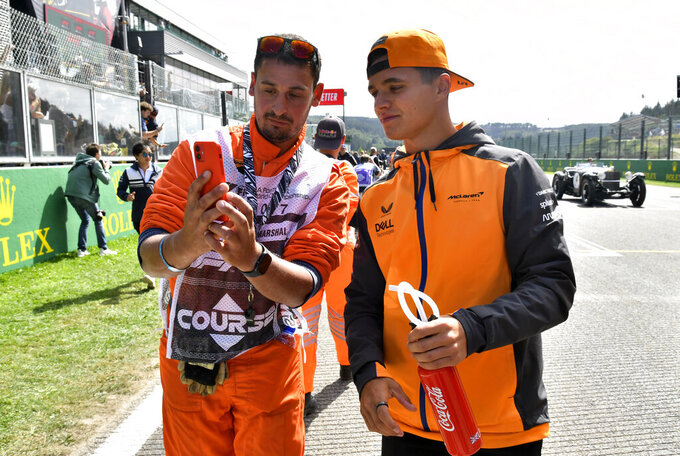 McLaren driver Lando Norris of Britain, right, speaks to a steward as he walks on the track prior to the Formula One Grand Prix at the Spa-Francorchamps racetrack in Spa, Belgium, Sunday, Aug. 28, 2022. (AP Photo/Geert Vanden Wijngaert)

Oscar Piastri insists his move to McLaren was decided “well in advance” of Fernando Alonso's decision to leave Alpine and free up that seat.

Piastri will join McLaren on a multiyear deal in 2023 after Formula One’s contracts board ruled against Alpine on Friday.

Alpine was in dispute with Piastri — the team’s reserve driver — after he said he didn’t want promotion to the Alpine seat vacated by Alonso on Aug. 1, the day after the Hungarian GP.

Alpine team principal Otmar Szafnauer said Piastri was in a simulator room when told he would replace Alonso, and that Piastri smiled and was grateful. Because he wanted to retain the 21-year-old Australian, the matter went to F1's Contract Recognition Board. The tribunal ruled that McLaren had an existing contract on July 4.

“My decision was made well in advance (of Alonso’s departure), which made Alpine’s announcement probably even more confusing and upsetting because we had told the team that I wasn’t going to continue,” Piastri told F1's website on Saturday. “The announcement (by Alpine) was false and it also denied me the opportunity to properly say goodbye to everyone at Enstone. I had been with team for a bit over two and a half years now, and for the rest of the team to find out I was leaving in that manner was very upsetting.”

Piastri won the F2 title last year and is seen as a top prospect. The day after Alonso stunned F1 by saying he was joining Aston Martin next year, Alpine put out a press release saying Piastri was promoted to team driver in 2023.

Piastri responded on Twitter to deny that in August: “I understand that, without my agreement, Alpine F1 have put out a press release late this afternoon that I am driving for them next year. This is wrong and I have not signed a contract with Alpine for 2023. I will not be driving for Alpine next year.”

He recalled the moment Szafnauer spoke to him in the simulator room.

“That was a bizarre and frankly upsetting episode. It was done publicly in front of some members of the team who were oblivious to the situation and I didn’t want to cause a scene," he said. “Once we were in private, I told Otmar what our position was.”

He felt he had no option but to deny Alpine's announcement.

“To have that falsely announced was something my management and I felt we had to correct, and there was also potential legal implications if we didn’t deny the announcement,” he said. "It was not intended to be pointed or in any way anything more than factual. The last line was quite a strong one, but with the CRB ruling, it shows it was purely a fact.”

Piastri said there was less trust with Alpine — something Alonso also alluded to when explaining his decision.

He also said his options were limited while Alonso was still there in a strong lineup with Frenchman Esteban Ocon.

“They publicly stated they wished to continue with Fernando for at least one or two more years. I respect that (but) my hopes were firmly set on an Alpine seat," Piastri said. "Similarly to Fernando, a bit of a strange feeling in negotiations. (There was a) lack of clarity around my future, and ultimately a breakdown in trust."

Piastri is replacing Daniel Ricciardo at McLaren and will be in a youthful lineup with 22-year-old Lando Norris in CEO Zak Brown's ambitious team. Piastri said Brown and team principal Andreas Seidl were “very straightforward.”

“Good arguments on both sides and walking out I thought it was about 50/50." he said Saturday. "I would have accepted either way."

But he disputes Piastri's version of events in the simulator room.

“I’ve never lied to you, and I never will. Oscar was in the simulator, when he finished his simulator session, I went and told him of the releases and to congratulate him," Szafnauer said. “Were there a group of people there? I can tell you no. It was myself, the simulator technician ... It wasn’t a group of people, it wasn’t bizarre, and he smiled and said ‘thank you.'"

He is not sure if Piastri will be released early from his Alpine duties.

Frenchman Pierre Gasly, who drives for AlphaTauri, has been linked to the vacant Alpine seat.

“We’re fortunate that we have great demand for our seats so we’re going to take a bit of time and consider," Szafnauer said. "You want the fastest driver you (can) get, one with experience, consistency and speed.”

AlphaTauri team principal Franz Tost declined to comment Saturday on if the team would allow Gasly to leave.

Ricciardo has also been linked with Alpine.

“As a fellow Australian, it’s unfortunate that of all people on the grid, it’s Daniel who I will be replacing,” Piastri said. "I have immense respect for Daniel. His achievements in the sport — his race wins and podiums — but also his personality he brings to the sport."

Alonso is moving to Aston Martin as a replacement for four-time F1 champion Sebastian Vettel, who is retiring.