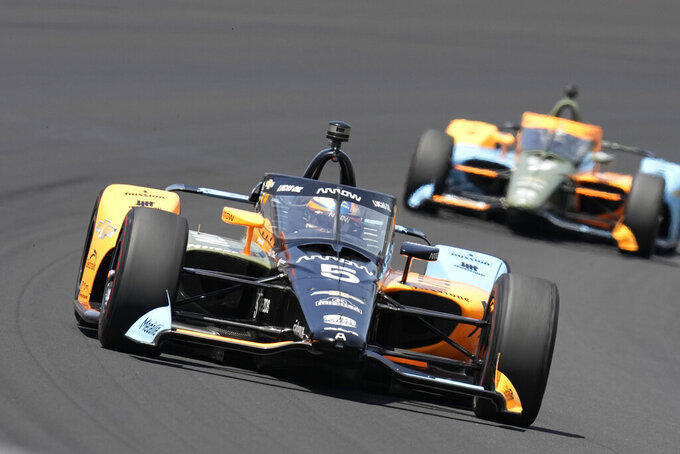 Pato O'Ward, of Mexico, drives into the first turn during the Indianapolis 500 auto race at Indianapolis Motor Speedway, Sunday, May 29, 2022, in Indianapolis. (AP Photo/Darron Cummings)

INDIANAPOLIS (AP) — Pato O’Ward stood crestfallen for another year on pit road as a second straight potential Indianapolis 500 victory fell just out of reach. O’Ward had Marcus Ericsson in sight but failed after 12 minutes on pit road to figure out how to get the jump off the final restart on the Indy 500 champion.

The centerpiece of Arrow McLaren SP gave it his best shot, and it still wasn’t enough to get a victory.

“I really don’t think I could have done it much better,” O’Ward said. “I think I did everything in my power pretty much perfectly in order to position ourselves to get it.”

Just as not as impeccable a final sprint to the checkered flag as Ericsson’s run.

O’Ward finished second in the Indy 500 on Sunday, perhaps a crushing feeling for the Mexican driver but the high point in a stout race for McLaren. Felix Rosenqvist finished fourth — and was the second-best Swede behind Ericsson — and two-time Indy 500 champion Juan Pablo Montoya was 11th.

Not a bad showing in the first Indy 500 for McLaren with majority ownership of the race team.

“Doesn’t get much closer,” said Zak Brown, the CEO of McLaren Racing. “If you would say coming into the race would you take a second, a fourth and an 11th, then you’d say yes. But sitting here right now feels a bit disappointing. But the team did a great job.”

O’Ward, a 23-year-old budding star, finished fourth in last year’s Indy 500 and felt for another year he simply didn’t have enough speed to catch the winner; Ericsson on Sunday, Helio Castroneves in 2021. O’Ward is in his third season driving the No. 5 for Arrow McLaren and is considered a championship contender. O’Ward and McLaren announced a contract extension through the 2025 season that included a McLaren for his personal use and potential opportunities for McLaren’s Formula One team.

Sure, a McLaren is nice. But he sure would have liked to add the Borg-Warner trophy to his collection.

“I sure as hell will do everything in my power to find more. We need to do a better job and just be better," O'Ward said.

O’Ward and Rosenqvist also gave Chevrolet its best finishes in a race where Honda placed six cars in the top 10 (including the winner). McLaren even bested the Team Penske fleet of Chevy drivers Josef Newgarden (13th), Will Power (15th), and Scott McLaughlin (29th).

Rosenqvist shared O’Ward’s disappointment in how the end played out. Jimmie Johnson crashed with four laps remaining and that brought out a red-flag stoppage at the Speedway. It wasn't enough time for Rosenqvist to figure a path to victory.

He also got beat down the stretch by 2013 champion Tony Kanaan, who finished third.

“I kind of went for it. I wanted to get Tony there,” he said. “I had him for a while but he held down the throttle on the outside and he got me back.”

Rosenqvist is in a contract year with McLaren and fighting for his job. A win could have changed everything for him.

“I think once you’re up there, it’s like anyone can win,” he said. “I wasn’t really happy in the last stint with the car. We kind of went a bit too far on the loose side. I lost a bit of confidence once I got passed by Marcus.”

McLaren, which made its mark in Formula One, is determined to become the official team of North America and is chasing fans and sponsors throughout the United States, Mexico and Canada. There’s no doubt McLaren is trending up, and the 2019 debacle when an unprepared team failed to qualify Fernando Alonso in the Indy 500 is well behind them.

Now the biggest sting in May comes from just missing out on the win instead of the race.

Which driver did Brown feel worse for out of his three drivers?