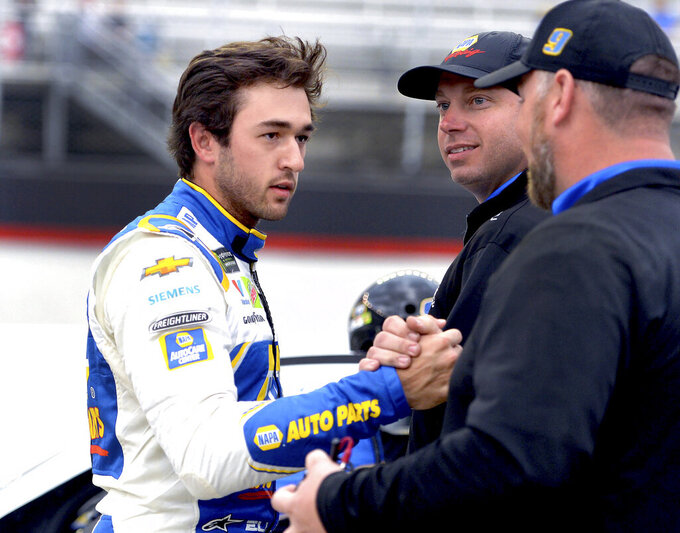 BRISTOL, Tenn. (AP) — NASCAR's second stop at a short track this season is yet another race that's impossible to predict. There's a new rules package, a traction strip around Bristol Motor Speedway and the general crankiness that short-track racing tends to produce.

Moods were mixed following Saturday's final practice and defending race winner Kyle Busch was less than pleased with how conditions are coming together. He was the fastest Toyota driver of the session, fifth overall, but got prickly when asked how he expected Sunday's race to go under NASCAR's high-downforce rules package.

"I think you're going to run or try to run wherever you can where the guy in front of you ain't because you certainly can't follow," said Busch, adding his car was "plowing tight. Aerotight at Bristol. At a short track. Fantastic. Can't wait."

NASCAR raced two weeks ago at Martinsville Speedway, the shortest track on the NASCAR circuit at 0.526 mile, and a track that typically forces drivers to gouge their way through the field. But the race did not live up to expectations and Brad Keselowski won in a runaway — he led all but 54 laps and was passed on the track only by Chase Elliott.

Busch warned that Bristol might be much of the same because of a rules package that emphasizes high downforce — one he's been dubious about since NASCAR said last year it was making radical changes.

"That's exactly what we told everybody," he said with a smirk.

Joey Logano cautioned that Bristol's 0.533-mile, high-banked, all-concrete bullring is so different from the paperclip layout at Martinsville, that it would take an effort such as Keselowski's to repeat that race. Keselowski's strong Ford had clean air down the long straightaways and into the flat, narrow turns, and that contributed to the underwhelming race.

"You get a good car up front that can control the pace, especially at a place like Martinsville ... if you get lead you get more air cooling your brakes, you can run the pace that you want to and you have everything cooler than the guy that was chasing you the whole time and you're able to drive away," he said.

Logano doesn't believe the leader at Bristol will be able to pull away the same way Keselowski did at Martinsville.

"Here the advantage is probably cut down some because you have traffic within the first 20 laps of a run," Logano said. "You're going to catch (lapped cars) pretty quick, so that clean-air advantage that you have will go away and that will keep the second, third, fifth-place cars all closer."

Drivers also have to figure out the traction compound applied to the bottom of the Bristol track that makes for a stickier second lane. The PJ1 traction keeps drivers in the low lane until it wears away or another driver is bold enough to venture up the high banking into the top lane.

Kyle Larson is typically the leader in taking that gamble, while conservative teams run along the bottom until the traction has been worn off.

Jimmie Johnson was the second fastest in the final practice — quickest of the winless Chevrolet camp — and said warmer temperatures Sunday or a long green-flag run will have drivers following Larson up to the lane early.

Johnson and his Hendrick Motorsports teammates, aside from Chase Elliott, have been struggling as Chevrolet in its second season with the Camaro still has not caught its competitors. Elliott and William Byron gave Hendrick the front row in Bristol qualifying, and Johnson found some late speed that improved his confidence about his car.

"We're putting stuff together and I'm trying to have some self-control and not be overly excited," the seven-time champion said. "I think our cars are just getting better. Internally, a little bit of sunshine helps a ton."

Through seven races, Toyota has four wins, Ford has three and the Chevy camp is still lagging. Elliott's victory at Kansas last October was the most recent for a Chevy driver, and that was only one of four victories all season for the Camaro.

Elliott, who starts from the pole at a short track for the first time in his career, likes his chances Sunday because his second-place finish at Martinsville was his best of the season. He led 49 laps.

He is encouraged by improvements within Hendrick and not worried about what could be a larger Chevrolet problem.

"I think blaming the manufacturer is the wrong route to go, and certainly isn't productive. I think the more you sit back, and do your job and make the most of whatever you have, the better results you are going to have," Elliott said.

"We need to see what other people are doing, doing that and doing it better. It's what this garage is all about, looking at it and trying to recreate it and make it better," Dillon said. "I am proud of the effort we are bringing to the track, and I think we are halfway there and we've got another half we need to get to before Chevy is winning and winning consistently."