NASCAR pulls into Watkins Glen with playoff spots to fill 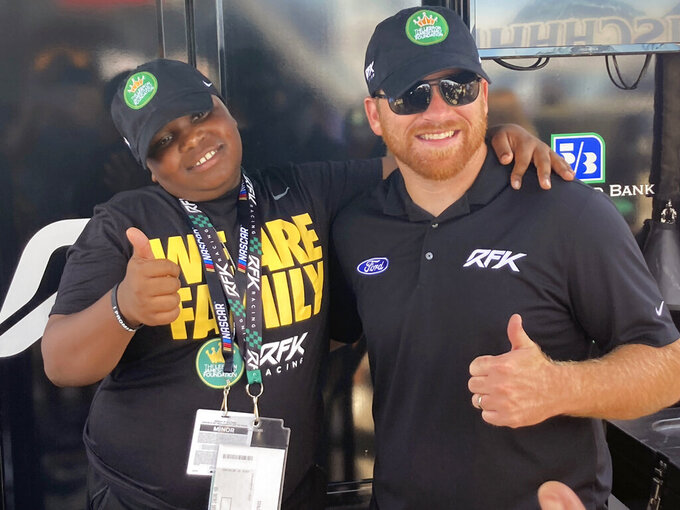 WATKINS GLEN, N.Y. (AP) — There are two races left in NASCAR's regular season, and Chris Buescher has only one avenue to make the playoffs — winning.

His next chance comes Sunday at Watkins Glen International, a high-speed road course where one small mistake in the 90 laps around the 2.45-mile track can ruin a day.

“I think it’s going to be a tough race to win,” said Buescher, who finished second to Daniel Suárez on the road course at Sonoma in June. “I feel really strong about our opportunity, our chances. I know what we’ve been able to do as an organization and what I’ve been able to do behind the wheel at some of these other road courses."

Last week at Richmond, Buescher gave another indication that RFK Racing is making strides with the Next Gen car. He drove the No. 17 Ford to the back bumper of leader Kevin Harvick in the closing laps before fading to third as Harvick claimed his second straight win.

“We've got to remember that it's big progress for us,” said Buescher, whose lone Cup victory in 245 starts came in a weather-shortened race at Pocono six years ago.

Watkins Glen and the regular-season finale at Daytona International Speedway on Aug. 27 are also the last chances for Ryan Blaney and Martin Truex Jr. to make the 16-driver playoff field.

They are not among the 15 who have won this season and sit second and fourth in points, separated by just 26. That leaves little margin for error if neither can get to victory lane and there is no breakthrough by one of the other winless drivers.

“It feels odd,” said Truex, who has four career road course victories, including at Watkins Glen in 2017 on the way to the Cup championship. "I feel like we missed some opportunities throughout the year and it’s been frustrating, honestly. But we’re still not out of it. We’ve got two shots. We’re working hard and trying to put ourselves in position to have a shot to win.”

Blaney, who signed a long-term contract with Team Penske this week, has made the playoffs every season since 2017 and has a pair of top-10 finishes in five career starts at The Glen.

Watkins Glen zoomed in popularity a decade ago with three straight fender-banging finishes involving the trio of Kyle Busch, Brad Keselowki and Marcos Ambrose. If there's a late caution in Sunday's race, watch out.

“At the end of these road courses, those are wild cards, too," Busch said. "I don't know that we can get five wide on the front stretch at Watkins Glen, but watch us. We'll try and see what happens.”

Harvick snapped a 65-race winless streak at Michigan two weeks ago and last week made it two straight. Three in a row promises to “be very difficult,” he said, though Harvick won at Watkins Glen in 2006.

Former Formula One champ Kimi Raikkonen of Finland is coming out of retirement to make his Cup debut for Justin Marks’ TrackHouse Racing. He's among a contingent of international drivers entered at Watkins Glen that could elevate the stress level.

Raikkonen worked with Suárez to prepare for the race.

FanDuel Sportsbook puts two-time Watkins Glen winner Chase Elliott as the favorite. He can clinch the regular-season title by gaining just four points. Hendrick Motorsports teammate Kyle Larson won last season at The Glen. ... Chevrolet is going for its 11th consecutive road course win in the Cup series. ... Hall of Fame driver Rusty Wallace is the grand marshal. ... No Cup race at Watkins Glen has been won from a starting position outside the top 20. The deepest in the field for a winner was Steve Park in 2000 from 18th.