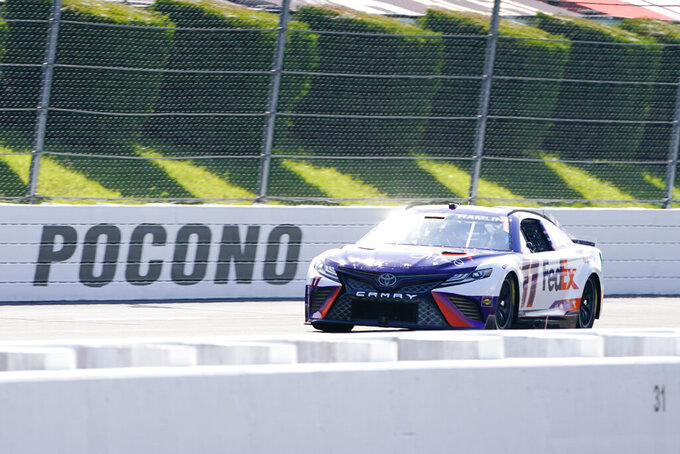 LONG POND, Pa. (AP) — The trio of drivers that will start sixth, seventh and eighth Sunday at Pocono Raceway are as intriguing to watch as the ones leading the field to green.

Ryan Blaney, Bubba Wallace, and Martin Truex Jr. are all winless. Blaney and Truex are hanging on to playoff spots by mere points -- not victories -- and there are only six races left until the playoff field is set.

In other words, for the drivers with a 0 in the win column, like Wallace, like Kevin Harvick, like Aric Almirola, time is running out to earn a checkered flag and snag that automatic spot in the field.

“This is the year you finally have to win to make the playoffs,” said Almirola, of Stewart-Haas Racing.

Starting position, not so much, especially at the 2½-mile track in a 400-mile Cup Series race. Harvick should hope not, at least: The SHR driver starts 26th in the No. 4 Ford.

Bell won at New Hampshire Motor Speedway, an achievement always worth a celebration but one that also took a load off the Joe Gibbs Racing driver.

“It was starting to get pretty scary there for a minute,” Bell said Saturday.

Ross Chastain, Chase Briscoe, Daniel Suárez, Tyler Reddick, Daytona 500 champ Austin Cindric, they all won the race that earned the right to race for the Cup Series championship over the final 10 races of the season. Throw in perennial winners such as Kyle Larson and Hamlin, and the playoff grid got cramped in a hurry.

There are some big names jostling for position.

The 46-year-old Harvick is riding a winless Jimmie Johnson-esque run on the back end of his career: Harvick hasn’t won since a September 2020 race at Bristol Motor Speedway.

That's easily the longest losing streak of his career -- 63 straight and counting.

Harvick seemed to shrug off the pressure ahead. The 2014 Cup champion and 58-time race winner won at Pocono in 2020, one of his nine wins that season.

“I mean, between myself and Truex and Harvick, we’ve all had decent years,” Blaney said. “We’re just all sitting in kind of a funky spot. It just shows this new car can produce all these different kinds of winners.”

NASCAR's attempt at modernizing the car has seemingly leveled the playing field. Teams get all the same pieces from varying vendors and have detailed instructions regarding how to put it together — essentially a kit car.

Whatever the reason for the packed house in the playoff standings, drivers across the board with something to race for this summer only care about making sure they join the club.

“I don’t really sit around and I’m like, man I’m surprised we haven’t won. I just try to figure out how we can do it,” Blaney said. “We do have a car capable of winning, what can we make better to make sure we capitalize on those opportunities?”

There is a twist.

There's a slim chance -- though this season who can count out any scenario? -- that more than 16 drivers could win a race and the final playoff spot or spots would be decided on points. No winner wants to get squeezed out.

“That points picture is incredibly tight, so it certainly could be a talking point,” Cindric said. “From my standpoint, I just do my job and try to stay above that top 16 and the rest will work itself out.”