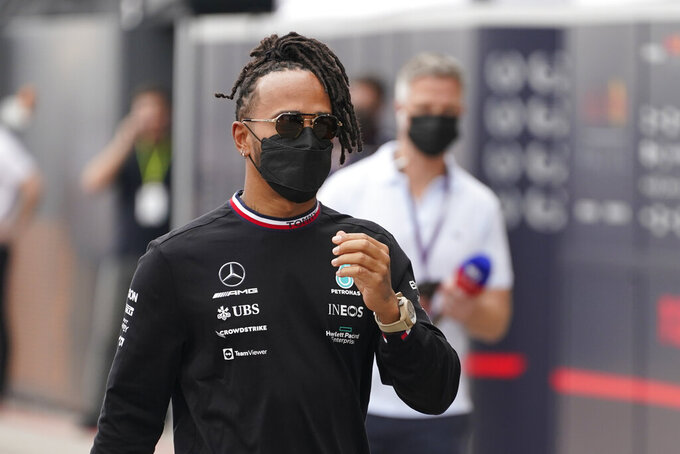 Mercedes driver Lewis Hamilton, of Britain, walks to a news conference before the Formula One U.S. Grand Prix auto race at the Circuit of the Americas, Thursday, Oct. 21, 2021, in Austin, Texas. (AP Photo/Darron Cummings)

AUSTIN, Texas (AP) — The U.S. Grand Prix is not a must-win race for Lewis Hamilton, and the seven-time champion brushed off such a suggestion Thursday even as he trails Max Verstappen in the title fight and his rival should be favored at Mexico City in the next round.

Verstappen is a two-time winner in Mexico City, where Formula One races Nov. 7 and the Red Bull team has been dominant. But up first is Sunday's race at the Circuit of the Americas and Hamilton, who calls COTA his “happy hunting ground" because he's won five times in Texas, trails Verstappen by six points in the standings.

“It’s important to win every race somehow, you know, maximizing our points, that’s our goal over these next six races,” Hamilton said Thursday. “It’s going to be incredibly difficult and there will be moments where we can perhaps edge (Red Bull) out. I don’t like to assume that Mexico is not going to be strong but they are usually very strong in Mexico.”

The series comes back now with a thrilling title fight between upstart Verstappen and the superstar Hamilton. He clinched his 2015 and 2019 titles at COTA and Hamilton has won in five of F1's eight races at the track.

Verstappen, a seven-time winner this season, hasn't won at COTA but has been good. His sensational drive in the rain to fourth as a 17-year-old rookie with Toro Rosso in 2015 unveiled his potential as a championship contender.

Valtteri Bottas drove his Mercedes to victory ahead of Verstappen in Turkey two weeks, and won in Austin in 2019 from pole position. Red Bull will need Sergio Perez running near the front to help Verstappen keep pressure on both Mercedes drivers.

Most of the drivers praised the decade of growth of F1 in the U.S. and the addition of next year's Miami Grand Prix, the first of a 10-year plan to race in south Florida.

The announced 2022 calendar includes 23 races with two U.S. stops, at Austin and Miami. But there's been talk of adding a third race, in Las Vegas, and drivers joked a weekend in Sin City might be more than some could handle.

“I had a big weekend in Las Vegas,” Bottas said. “After that, I said ‘Never again.' I would be happy enough to go back. It was many years ago, so I've recovered. Honestly, having more races in the U.S. would be a good thing."

Hamilton loves both New York City and Hawaii, and said Thursday he will retire to Hawaii. He supports expansion in U.S, but lobbied for a race in South Africa.

“The place that I really feel is to my heart and most important for me, is to get a race back in South Africa. I think we got a great following out there, and I think it would be great to be able to highlight just how beautiful the motherland is,” Hamilton said.

Lance Stroll, a Canadian who drives for Aston Martin, wondered if there's a limit to how many races should be on the F1 schedule.

“There needs to be a limit of how many races we have in a a season," Stroll said. "If we start pushing the number we currently have, it becomes tough for everybody, for mechanics, for engineers, everyone has families back home.

"More races in the States would be good, I just think Formula One has to have a limited amount of races. It can't get out of hand.”

Formula One released the results of a global fan survey with Nielsen and Motorsport Network. Fans said McLaren is their favorite team and McLaren driver Lando Norris was the most popular among female fans.

The award seemed to embarrass the 21-year-old British driver when told about it Thursday.

Verstappen was rated the sport's most popular driver overall, with a strong following in the U.S. and Japan.

“My life is complete. That's what I always wanted and can happily retire," Verstappen quipped.

“Probably all my friends,” Verstappen said. “I'm here to win races. Its great there are 12 people out there who like me.”

Many of the drivers took part in a free throw shooting challenge as a race weekend tie-in with the NBA for the league's 75th anniversary. The drivers found themselves head-to-chest with former NBA forward Dikembe Mutombo.

Verstappen's form looked like he'd never held a basketball before. Williams driver George Russell admitted he hadn't. He went 0-of-10 from the line.

“It was pretty embarrassing,” said Russell, who is tall for a Formula One driver at 6-foot-1. “It was the first time I've been with a group of people where I looked small.”

Ricciardo on Saturday is scheduled to drive the late Dale Earnhardt’s iconic 1984 No. 3 Wrangler Chevrolet Monte Carlo, his reward from McLaren boss Zak Brown for winning his first race with the team. The car is the original and now part of Brown’s collection.

Ricciardo arrived at the track dressed in full western wear -- bolo and big belt included -- and the Australian attempted to use an accent that sounded part-Cowboy and part-NASCAR. “Boogity, Boogity, Boogity,” he even drawled.