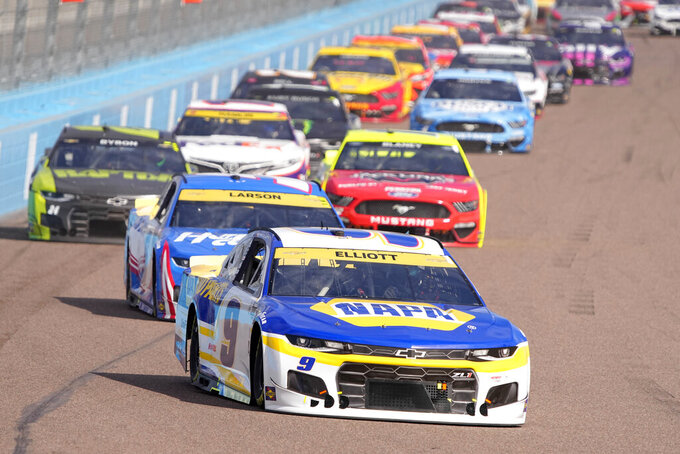 AVONDALE, Ariz. (AP) — Chase Elliott stood on pit row next to his No. 9 car, a vacant look in his eyes as he gazed into the distance.

Team owner Rick Hendrick squeezed his way through the crowd, put a hand on Elliott's shoulder as he offered a few words of encouragement. Four-time champion Jeff Gordon, now vice chairman at Hendrick Motorsports, was next with a short conversation that spread a slight smile across Elliott's face.

The bid for a second straight championship came up just short. It still wasn't a bad encore for the 25-year-old NASCAR star.

Unable to track down Hendrick Motorsports teammate Kyle Larson, Elliott finished fourth in the NASCAR Cup Series championship by taking fifth in the finale at Phoenix Raceway on Sunday.

“When you’re a good driver and a good person and you surround yourself with good people, success is warranted. It’s good to see that,” said Elliott, who finished behind Larson, Martin Truex Jr. and Denny Hamlin in the season championship. “But we’ll be back stronger next year and try to give them a run.”

Elliott has been NASCAR's most popular driver, following the tread marks of his father, Bill, who won the fan vote a record 16 times. He took a bigger star turn by getting hot late last season, winning three of the final five races, including the Phoenix finale for his first championship.

The bid for a second straight championship took a bumpier road.

Elliott won two times, both on road courses, but wasn't even the best driver on his own team. That honor went to Larson, the 31-year-old who returned from a nearly yearlong suspension to win 10 races and a championship.

Elliott still managed to get into the Cup Series final four by finishing seventh in Kansas, second in Texas and 16th at Martinsville. That earned the driver from Georgia a chance to become the first repeat Cup Series champion since Jimmie Johnson from 2009-10.

Starting second at Phoenix, Elliott kept himself near the front throughout a hot afternoon at Phoenix Raceway and led 94 laps. He was fourth out of the pits during a caution with 25 laps to go and appeared to be ready to make a move to the front when he passed Hamlin for third.

Instead, Hamlin passed him with 10 laps to go and Elliott lost another spot to Ryan Blaney as his new teammate sped off to the championship.

“I felt like we all kind of had our moments really throughout the day,” Elliott said. “You get a caution with 20 laps to go, it’s going to be very difficult to run down and pass the guy that jumps out front in the restart.”

So the repeat championship didn't happen. The trajectory didn't fall off that much for a driver who struggled early in his career to finish races.

Elliott was right there, even if he couldn't complete a second straight championship.

“Some of those really tough days I thought prepared us to be able to come here and have a shot to win last year,” Elliott said. “Those tough losses teach you good lessons. I felt like our team came into the last couple years here with a really good mindset and were mentally strong enough to go and compete for the win. That’s really all you can ask for.”