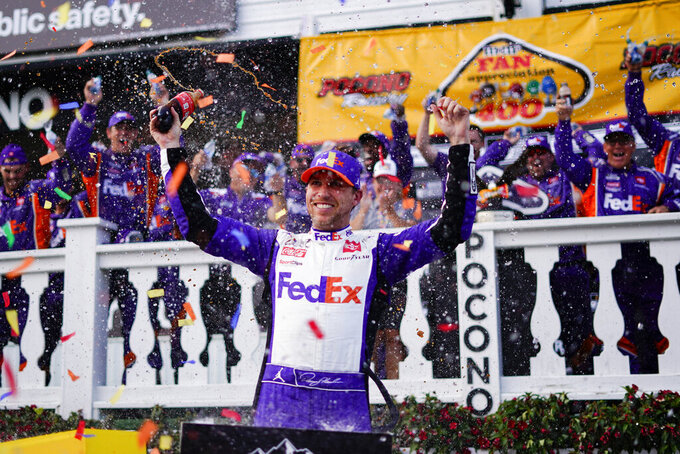 Chase Elliott left Pocono Raceway as a third-place finisher and learned when he landed home in Georgia that he had been declared the race winner.

Whether NASCAR's most popular driver wants to celebrate the victory or not, it's his — Joe Gibbs Racing declined to appeal the penalties levied by NASCAR that stripped Denny Hamlin of his Pocono win and cost Kyle Busch his runner-up finish.

Hamlin was the first Cup winner to be disqualified since April 17, 1960, when Emanuel Zervakis’ victory at Wilson Speedway in North Carolina was thrown out because of an oversized fuel tank.

The Toyotas were shipped to NASCAR’s research and development center in North Carolina for further evaluation, and additional points or monetary penalties could still be issued against JGR.

Elliott was gifted his fourth win of the season, without the Hendrick Motorsports driver ever leading a lap Sunday in his No. 9 Chevrolet. The series points leader will take the win, even if he doesn't feel great about achieving it without a checkered flag.

“I was probably just kind of more surprised by it than anything,” Elliott said Monday. “I don't think any driver wants to win that way. I certainly don't.”

Hamlin — who had already zipped his young daughter around the track on a victory lap — and the rest of the field had long left Pocono when the NASCAR inspection team found issues in both Toyotas that affected the aerodynamics.

“There really was no reason why there was some material that was somewhere it shouldn’t have been. And that does basically come down to a DQ," NASCAR Cup Series managing director Brad Moran said Sunday night.

Team owner Joe Gibbs said Sunday he was “shocked” by the ruling and his organization planned "to review every part of the process that led to this situation.”

Pushing the edge of the rulebook — creatively or illegally — has been a part of NASCAR's culture since its inception. But NASCAR toughened its punishments entering the 2019 season in a bolder bid to squash cheating. The biggest shift came in inspections, which nailed the JGR drivers on Sunday. NASCAR ensured postrace inspections would take place at the track instead of midweek at the sanctioning body’s research and development center outside of Charlotte, North Carolina.

Winning teams found in violation of the rules before 2019 were penalized with postrace fines, point deductions and/or suspensions. But drivers didn’t have victories taken away from them until then.

For example, Joey Logano kept a 2017 win in Richmond even after a midweek teardown of his car at the R&D center showed his Team Penske team broke rules. Logano, though, could not count the win toward postseason consideration.

Hamlin won't be so lucky. He lost this third win of the season, his record seventh victory at Pocono and a 49th career win that would have tied him on NASCAR's career list with three-time champion Tony Stewart.

Elliott now gets the winner's purse, but Hamlin will stand as the victor among most major gambling sites. FanDuel Sportsbook said Monday the house rules state bets are settled on the result of the podium presentation regardless of any subsequent disqualifications. Where things gets murky is with fantasy players.

— Elliott received 43 points for finishing first after the postrace inspections.

NASCAR could hit JGR with stiffer points penalties and fines than Zervakis faced in 1960. The Associated Press reported that officials held up Zervakis' purse of $1,275 after he won the race without a pit stop and “carried about a half-gallon of gasoline more than is considered stock in the technical ratings of his 1960 Chevrolet.” Joe Weatherly earned the win.

The 27-year-old Elliott, the 2020 Cup Series champion and NASCAR's most popular driver for four straight seasons, said he was moving on from Pocono as if he did indeed finish third. And he said he won't ask for the trophy.

“I'm not going to celebrate someone's misfortune," Elliott said. “That doesn't seem right to me. I crossed the line third. That's kind of how I'm looking at it.”