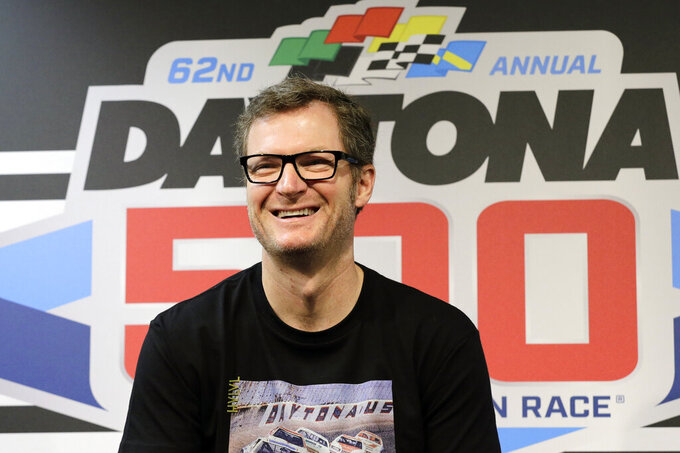 FILE - Dale Earnhardt Jr. answers questions during a news conference before the NASCAR Daytona 500 auto race at Daytona International Speedway in Daytona Beach, Fla. on Feb. 16, 2020. Earnhardt Jr. will experience a different type of horsepower before NBC’s coverage of the NASCAR Cup season revs up next month. The retired NASCAR superstar will be at the Kentucky Derby for the second time on Saturday before contributing to the network’s Indianapolis 500 coverage on May 29. . (AP Photo/Terry Renna, File)

Dale Earnhardt Jr. will experience a different type of horsepower before NBC's coverage of the NASCAR Cup Series season revs up next month.

The retired NASCAR star will be at the Kentucky Derby for the second time on Saturday before contributing to the network's Indianapolis 500 coverage on May 29.

Earnhardt said having a role in different events beyond NASCAR was a big reason why he decided to sign with NBC after retiring from driving in 2017.

“I've really enjoyed NBC pushing me and getting me out of my comfort zone. And it's terribly uncomfortable to put on a sports coat and dive head first into being a part of the broadcast team at these events. I feel at times really undeserving and out of place,” Earnhardt said in a phone interview with The Associated Press. “I'm thankful that they pair me with Rutledge Wood, who I'm really familiar with and great to work with. And that really knocks the edge off the experience to where I feel pretty comfortable.”

Earnhardt and Wood will take part in a scavenger hunt during Saturday's coverage. The segments will include some time in the infield, a trip up into the iconic Twin Spires and one of the speakeasy locations hidden within Churchill Downs.

Earnhardt's segments — whether it be at the Derby or Super Bowl pregame show — are meant to show things that appeal to him and may resonate with viewers. He said executive producer Sam Flood told him many of those fans have never been to the event.

“To see you experience it, to be a fish out of water and keying in on those things that jump out at you and get you interested, people can relate to that," Earnhardt said.

Sometimes Earnhardt's experiences come with surprises. During the Super Bowl pregame show in February, he was stunned by a T-Rex that came out of nowhere during an interview promoting “Jurassic World” with Jeff Goldblum. That did not happen during rehearsals.

Earnhardt said the one thing that continues to blow him away about his first Derby trip in 2019 was seeing the difference in size between a normal horse and a Triple Crown contender. He compared it to putting a normal person next to an NFL player.

“It was my favorite thing that I experienced. It really helps you understand how impressive they are,” Earnhardt said.

Earnhardt is also excited about returning to the Indianapolis Motor Speedway, where he will work alongside Danica Patrick and Mike Tirico. There will be an animated feature narrated by Earnhardt where he will discuss his first trip to the infield's Snake Pit music party during the race.

Earnhardt is planning on bringing his wife, Amy, to Indianapolis for her first 500.

“I want her to see all the tradition and the build up to the race because you can’t experience anything like it at a NASCAR race,” he said. “It’s like a national event. Having not grown up in that world I couldn’t appreciate it more had I been born into it.”

Earnhardt's offseason did include a return to the NASCAR booth as an analyst for Fox during last month's race at Talladega. He said it was a good chance to knock the rust off before NBC's schedule begins June 26 at Nashville.