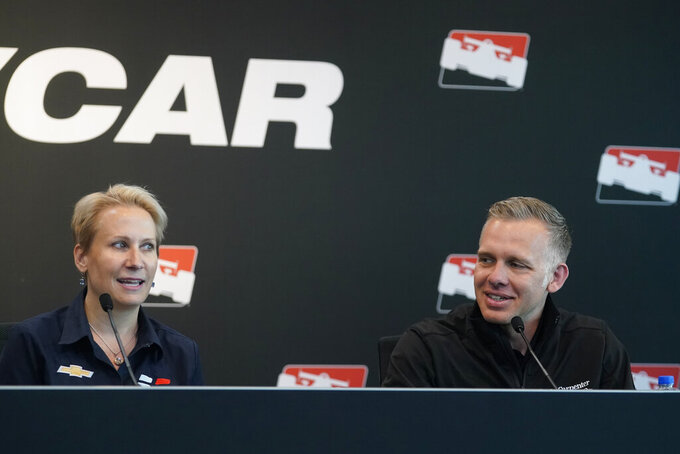 So she made a deal to run three races on this season's schedule, and perhaps more, in lieu of the Indianapolis 500.

Paretta made the announcement Tuesday at Indianapolis Motor Speedway, the same venue she announced the formation of her all-female team and the same venue it became such a compelling story last May while working with series powerhouse Team Penske.

Swiss driver Simona de Silvestro will again pilot the No. 16 Chevrolet but this time Paretta Autosport will be working with Ed Carpenter Racing on June 12 at Road America in Wisconsin, July 3 at Mid-Ohio and Aug. 7 on the streets of Nashville, Tennessee.

“We had to figure out what would be the best fit for us and if Ed was running three cars at the 500, we didn’t really want to be the fourth car," Paretta said. “The decision was, ‘OK, they’re going to do three cars for 500 and that allows us to do these three races later in the year.’ This is growth for my team. It’s getting our team to new places, it’s getting Simona to new places and as far as becoming a full-time team, this is a good investment for us."

It comes with a cost — bypassing a chance to become the 33rd entry for the series' biggest race next month. But skipping the 500 could make Paretta’s team more competitive in the long run.

Last May, de Silvestro struggled during qualifying week and sweated out an anxious Bump Day to hold onto the final starting spot on the traditional 33-car grid. She finished 31st.

This year, De Silvestro plans to arrive before the scheduled May 29 race date and will work with Carpenter's team during the following week's stop in Detroit before making her season debut.

“We were really hoping to grow and now joining Ed Carpenter Racing I think is definitely the way to go,” de Silvestro said. “It’s amazing. The places we’re going to are tracks where I’ve been quite fast in the past, so I’m super motivated.”

In the meantime, Paretta's all-female crew will continue refining their pit-stop skills as they adapt to cars coming into the pit stalls from a different direction than they did last year in Indy.

A potential pairing of de Silvestro and Colombian rookie Tatiana Calderon, who competes on road and street courses for A.J. Foyt Racing, also could be another step forward for women in the series. Road America could mark the first time two female drivers compete in the same IndyCar race since 2013.

“We have research that shows IndyCar is growing overall but one of the fastest growing segments is women. That’s true for races generally as well as television audiences,” said Mark Miles, president and CEO of the series' parent company, Penske Entertainment. “We're just really pleased you’re taking this next step.”

Paretta did not provide any hints about what other races could be added.

The red, white and blue car will be sponsored by KiwiCo, which bills itself as a company that specializes in creating STEM and STEAM building kits for people ages four to 104. The University of South Carolina also agreed to return as an associate sponsor this year and Paretta said she will retain most of the crew members who worked with de Silvestro last season.

Skipping the 500 leaves a hole for that 33rd car on the entry list. With 32 car-driver combinations already on board, many thought Paretta and de Silvestro would fill the void.

Instead, Miles expressed confidence there will be enough cars to fill the field and perhaps even enough to create some Bump Day intrigue.

“A lot has been written about that and I think we can pretty much guarantee there will be 33 cars in the field and possibly one more,” Miles said.

But getting Paretta back on the track with two more starts than the team made in its inaugural season has everyone eager to see the results and what's next for Paretta Autosport.

“Beth and I have have discussed different ways to help her dreams, and it took us a little while to find the fit but we’re finally there,” said Carpenter, the three-time Indy pole winner and 2018 runner-up. “It's going to be fun.”