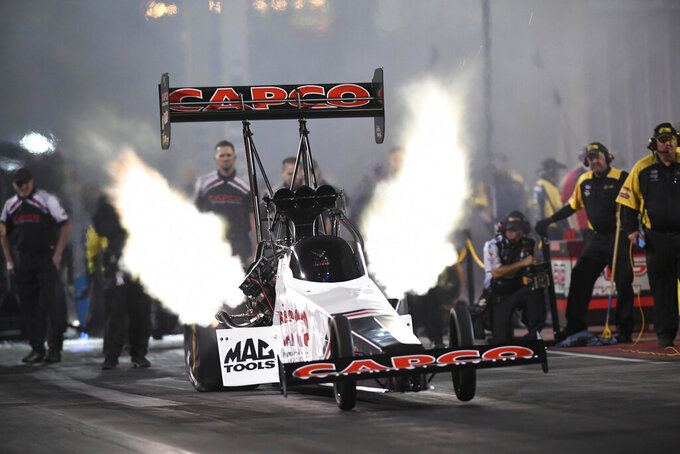 Johnson beat Bob Tasca in the final with a 4.102-second run at 308.50 mph in his Dodge Charger SRT Hellcat. Johnson has 19 career victories.

"We made a great run last night — my quickest and fastest ever on the mountain — and it gave the guys confidence," Johnson said. "I knew going into today we had a good racecar and my guys did a great job. We're a much better team now and we've grown so much as a team, so it's good to get it done. It wasn't easy, but we finally got a couple breaks and we finally got it done here."

Steve Torrence won in Top Fuel for his eighth victory in the last nine events. The defending series champion and points leader beat Clay Millican with a 4.044 at 270.21. He won the event for the second time for his 35th career victory.

Anderson won for the second straight year in Colorado for his first victory of the season and 92nd overall. He topped Matt Hartford with a 6.950 at 196.96 in a Chevrolet Camaro. Points leader Hines won for the sixth time in eighth events this year, topping Eddie Krawiec with a 7.174 at 186.67 on a Harley-Davidson. He has five victories at the track and 54 overall.