Reddick drives from last to 1st to win Bristol 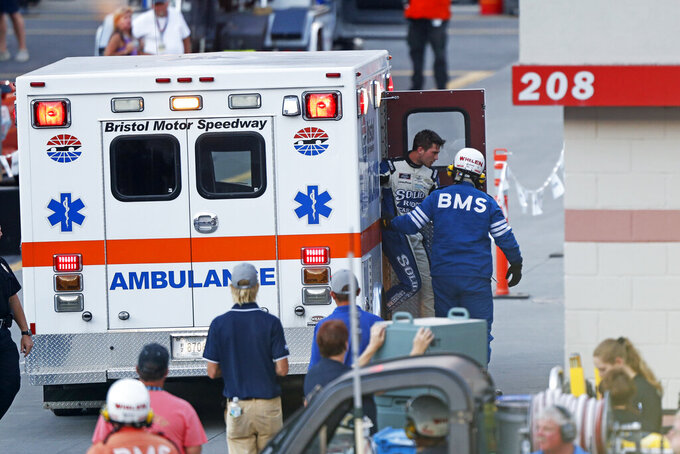 Mason Diaz makes his way to the Care Center from an ambulance after wrecking during a NASCAR Xfinity Series auto race on Friday, Aug. 16, 2019, in Bristol, Tenn. (AP Photo/Wade Payne)

Reddick, the Xfinity Series points leader and defending series champion, had to start last in the field because his car failed inspection four times before the race. His crew chief was ejected, Reddick wasn't allowed to post a qualifying time, and he had to serve a pass-thru penalty at the start of the race.

"We just had some issues in tech, nothing crazy," Reddick said.

Reddick still managed to drive his way to the front and pounced when Allgaier bounced off the wall with 11 laps remaining. Allgaier led 131 laps but dropped to eighth.

"I don't know how you process it," Allgaier said. "I don't know what else to do, man. I feel like we deserve a win."

Only six cars finished on the lead lap.

Kyle Busch led 137 laps and won the second stage but immediately went behind the wall with an engine failure. He finished 29th.

"It just all of a sudden started about five, six laps before the stage ended," Busch said. "Coming off the corner I got back into the gas and it broke and just tried to limp it home and that was all she had."

But Busch, an eight-time Cup winner at Bristol, had a poor qualifying effort and will start 31st Saturday night.