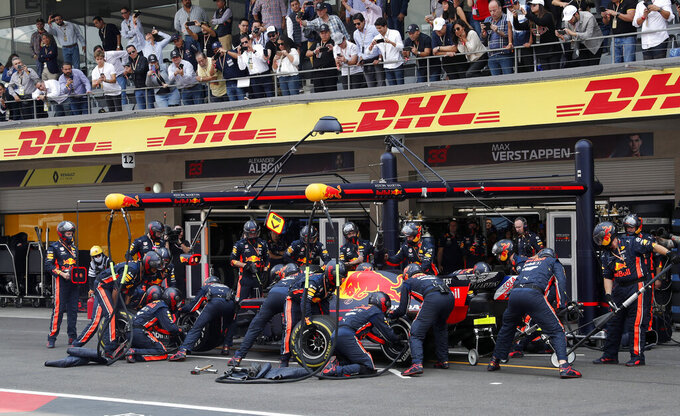 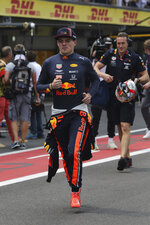 MEXICO CITY (AP) — Max Verstappen will go to the U.S. Grand Prix mad about what might have been in Mexico.

The Red Bull driver fought his way from the back to a sixth-place finish at the Mexican Grand Prix on Sunday. That he didn't have a chance to fight for the win or a podium is his own fault.

Verstappen's penalty for unsafe driving in qualifying bumped him off his second career pole position into fourth at the start. That meant he had to navigate the crowd of cars at the first turn of the race out of a furious sprint.

That didn't work out.

Verstappen and eventual race winner Lewis Hamilton bumped in the second corner and both cars went into the grass. Back down in eighth, Verstappen fought back three laps later to make a passing move on eventual third-place finisher Valtteri Bottas. Verstappen got by, but his right rear tire was punctured when it clipped Bottas' front wing. The tire soon shredded and Verstappen drove nearly an entire lap with a bare wheel as he dropped to last place.

Only a furious drive without another tire change brought him back to sixth.

"To come back to sixth was actually not a bad result if you look at everything that went on," Verstappen said.

But it only highlighted Red Bull's winning potential in driver and car that was wasted by Saturday's penalty.

The two-time defending race champion had been struggling since the summer break but in the thin air of Mexico City his blistering lap in qualifying easily topped Ferrari, everyone's pole favorite. Then Verstappen admitted in the post-qualifying press conference that he didn't slow down under a yellow flag on his final lap after Bottas crashed in front of him. He even dismissed a question whether that was unsafe.

His comments quickly drew an investigation and a penalty. And they doomed his victory chances.

The episode was a return to the brash Verstappen who rarely backs off, on or off the track. And it likely prompted his aggressive moves at the start Sunday as he fought to regain the front.

Driving angry had worked here in 2018. Verstappen seethed that he'd been bumped off the pole by then-teammate Daniel Ricciardo and channeled that anger into a brilliant move into the first turn that set him up for an easy victory.

Verstappen couldn't do the same Sunday. Not from fourth position.

"It's a real shame," Red Bull Team Principal Christian Horner said of Verstappen's race. "We could have had a lot more out of today."

The bump with Hamilton could have been more impactful. Hamilton said his car floor was damaged and he had to deal with that the rest of the race.

"I thought at some stage I'd get torpedoed by Max," Hamilton said. "I always leave Max a lot of space. That's the smartest thing you can do ... But I don't think it was intentional or anything like that. It was just, he's a magnet for those kind of things"

Bottas said Verstappen came "out of nowhere" when trying to make a rare pass in the slow corners of the track's stadium section and "earned his puncture." Verstappen suggested it was Bottas' fault.

"The race was still on until I overtook Valtteri and he clipped my rear tire," Verstappen said.

Verstappen's rookie teammate, Alex Albon, finished fifth and has outscored Verstappen in the six races since the summer break. Verstappen twice didn't finish races because of engine trouble or car damage from a collision. His finish in Mexico dropped Verstappen to fifth in the drivers' standings, behind Vettel.

Albon, who is still awaiting word from Red Bull on a contract for 2020, drove well, said Hamilton, who spent several laps behind him early in the race.

"He's got a very bright future ahead of him," Hamilton said. "I hope (Red Bull) are good to him."