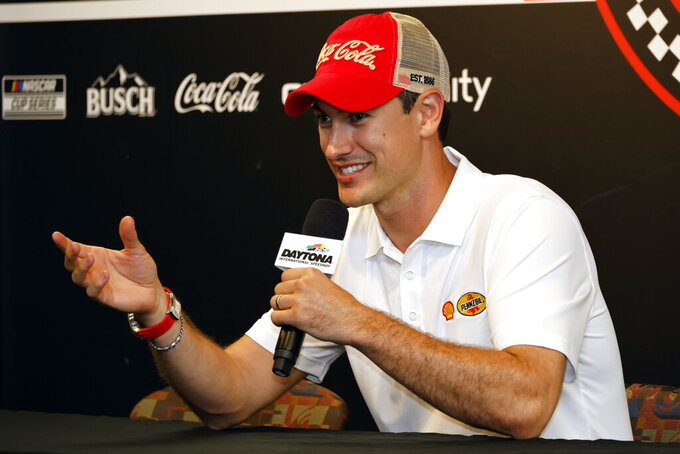 DARLINGTON, S.C. (AP) — Buckle up your five-point harness. Looks like NASCAR's playoffs will be just as wild and unpredictable as its regular season.

That came into sharp focus at Darlington Raceway where Erik Jones became the first-ever non-playoff racer to take the postseason opener in the Southern 500 on Sunday night — one week after the cutoff for playoff qualifying.

Jones' crew chief, Dave Elenz, was gratified his team finally broke through at one of the most difficult tracks in NASCAR. “But I think the first thing Erik said to me is, ‘Don’t you wish we won Daytona'” in the regular-season finale, Elenz said.

At the end, Jones outlasted all three of his old Joe Gibbs Racing teammates — Martin Truex Jr., Kyle Busch and Denny Hamlin. Truex lost a late lead with power steering problems, Busch's engine blew up with Jones in second. Hamlin reached Jones' back bumper on the last lap but couldn't pass him.

“It was crazy. I’ve never had anything like that happen,” Jones said.

Truex, like Jones, didn't qualify for the playoff. Busch and Hamlin are vying for the title.

Elliott bounced off the wall as he spun by himself in the first 100 laps, damaging his suspension, which his team could not repair. Top-seeded coming in, Elliott was out of the race and fell to ninth in playoff points.

Larson, the defending NASCAR Cup Series champion who is seeded fourth this year, had early engine problems and fell four laps off the pace. Larson steadily rebounded to get back on the lead lap and end 12th — not what was expected out of the 2021's most dominant driver.

“So, pretty bummed about it, but also happy at the same time because I thought we were going to have another DNF," said Larson, who fell to seventh in the point standings with two more races at Kansas and Bristol before four of the 16 playoff teams are eliminated.

Busch, faced with questions about his racing future much of the summer, looked he'd have a moment of celebration as he led the race with less than 40 laps remaining. Then his failing engine sent him to the garage.

The race's least surprising result? Continued driver anger over what they see as an unreliable, unsafe Next Gen car. The loudest voice Sunday came from Kevin Harvick, the 2014 series champ whose car caught fire and had flames coming through the dashboard.

Harvick parked the car on the grass and scrambled away to safety. He did not return. Moments later, J.J. Yeley's machine caught fire under the hood and he, too, had to get out quick.

Drivers have said the hits this year feel harder, something NASCAR's analytics back up. Kurt Busch gave up his playoff spot due to his continuing recovery from a concussion suffered in a crash at Pocono.

“I’m sure it’s just crappy parts on the race car like we’ve seen so many times,” Harvick said. “They haven’t fixed anything. It’s kind of like the safety stuff. We just let it keep going and keep going.”

Harvick fell from ninth in the playoffs coming in to 16th and is on the brink of elimination if things don't improve the next two weeks.

Darlington brought a quick and surprising shuffle to the playoffs, which are unique among sports because those who aren't racing for a title still get to race for victories. Imagine if the NL's top-seeded Los Angeles Dodgers lost to the Florida Marlins, who didn't make the playoffs. That's what happened at Darlington as Jones won his third NASCAR race and second Southern 500.

Jones, who drives for Petty GMS, was the 17th racer to win in 27 races this season, closing in on the most ever in NASCAR, which was 19 different winners in 2001.

Jones also gave the history-filled No. 43 car, made famous by NASCAR Hall of Famer Richard Petty, its 200th win.

Joey Logano, fourth at Darlington, moved into the points lead with William Byron second, Hamlin third and Christopher Bell fourth. Joining Harvick on the bubble as the first four out were first-time playoff participants in Austin Cindric and Chase Briscoe, and Austin Dillon, who pulled off a win-and-in at Daytona a week earlier just to make playoff field.