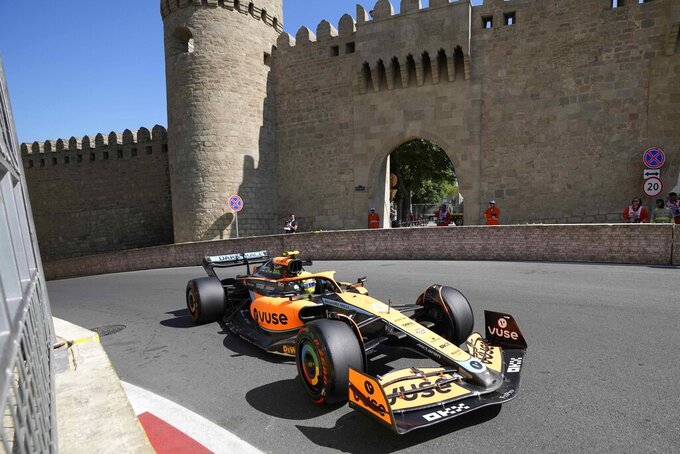 Mclaren driver Lando Norris of Britain steers his car during the first free practice at the Baku circuit, in Baku, Azerbaijan, Friday, June 10, 2022. The Formula One Grand Prix will be held on Sunday. (AP Photo/Sergei Grits)

BAKU, Azerbaijan (AP) — Charles Leclerc set the fastest time of the day in second practice for the Azerbaijan Grand Prix on Friday as he aims to turn around his recent run of disappointing race results, after Sergio Pérez led the first session.

Leclerc set the pace for Ferrari with a lap of 1 minute 43.224 seconds in the second session, .248 seconds ahead of Red Bull's Sergio Pérez and .356 faster than championship leader Max Verstappen. Fernando Alonso was fourth for Alpine and Leclerc's teammate Carlos Sainz fifth.

Leclerc has qualified on pole position for each of the last three races but couldn't convert those into wins. He was also on pole last year in Azerbaijan but finished fourth. Verstappen is nine points ahead of Leclerc in the standings.

Pérez was fastest in Friday's first session, .127 seconds faster than Leclerc and .334 faster than Verstappen, who told his team there was “insane” wind on the long seafront straight. The times were around 2 seconds slower than those in the second session. There were problems for Mick Schumacher, whose Haas stopped after seeming to leak fluid, and Nicholas Latifi, whose Williams lost power and came to a halt.