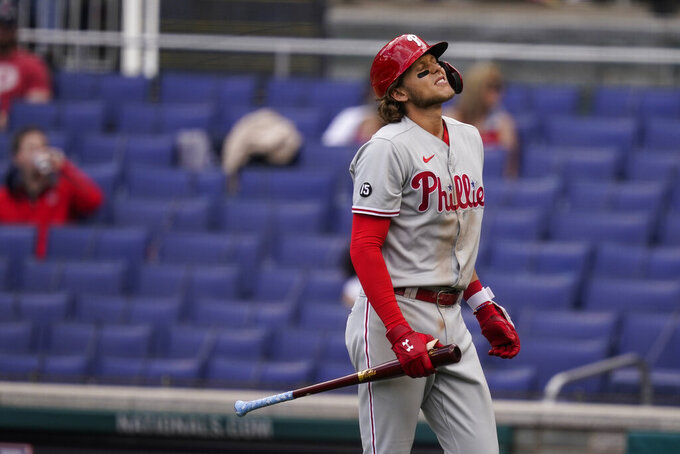 Philadelphia Phillies' Alec Bohm reacts after striking out during the ninth inning of a baseball game against the Washington Nationals at Nationals Park, Thursday, May 13, 2021, in Washington. The Nationals won 5-1. (AP Photo/Alex Brandon)

Chicago Bears coach Matt Nagy will participate virtually in the team’s rookie minicamp this weekend rather than in person because a close contact tested positive for COVID-19.

Nagy will not be on the field when quarterback Justin Fields and the team’s other rookies get to work on Friday. They're also scheduled to practice Saturday and Sunday.

Nagy will be able to observe remotely and communicate with coaches. He will also be able to lead team meetings, which are conducted via Zoom.

The Minnesota Twins are ramping up to full capacity for home games at Target Field.

Starting Friday, games scheduled for the rest of May will operate at up to 60% capacity, and the club’s 12 home contests in June will be at 80%. Full capacity starts July 5 for the final 40 regular-season home games.

Beginning with the June 8 game, tickets will no longer be restricted to pods and will be available in locations throughout Target Field.

The club says all planned capacity changes are subject to change to be in line with public health guidance.

Starting May 21, attendance will rise to 16,000 through June 10, then increase to full capacity when the New York Yankees visit two days later and stay at 100% for the rest of the season.

A limited number of seating pods will be available for fans who prefer to remain in a socially distanced environment. Tailgating will also be permitted in lots surrounding the ballpark.

The Chicago White Sox will get to play before larger crowds at home after the city and state increased capacity at their ballparks to 60% on Thursday.

The increase will take hold for the White Sox when they host St. Louis on May 24. Tickets at Guaranteed Rate Field will be sold in pods, with at least one open seat between pods in the same row.

The White Sox will also have two sections for vaccinated fans only when they host the Kansas City Royals this weekend. Those sections will be sold at full capacity and with no distancing. Fans will be required to show proof of vaccination as well as a photo ID.

The White Sox will also have two vaccination sites at Guaranteed Rate Field starting May 24. Fans who get vaccinated before the game will get a $25 gift card to use inside the ballpark.

Ontario’s Minister of Heritage, Sport, Tourism and Culture Industries says the province’s chief medical officer has not yet signed off on the Canadian Football League’s return-to-play protocol.

Lisa MacLoud also says there’s no timeline for it. Ontario and British Columbia have not provided verbal approval of the CFL’s proposal.

The league didn’t play in 2020 due to the COVID-19 pandemic and had originally planned to stage a full 18-game season starting in June. But last month the league pushed back the start of the campaign to Aug. 5 and reduced the number of games to 14 because of the pandemic.

That forced the league championship, the Grey Cup, to be pushed back three weeks to Dec. 12 in Hamilton.

CFL commissioner Randy Ambrosie said last month it was the league’s hope that when it resumed play, it could host a limited number of fans.

The Chicago Cubs have been given the go-ahead to host up to 60% of Wrigley Field’s capacity when they begin a three-game series against the Cincinnati Reds on May 28.

That translates to an attendance of just under 25,000. Single-game tickets go on sale Tuesday to the general public on a first-come, first-served basis in seating pods of up to six people. There will be a minimum of one open seat between pods within the same row.

State and city officials are requiring a designated area specifically for fully vaccinated fans at Wrigley for a four-game series against the Washington Nationals that begins Monday. Those who purchase tickets will be required to present proof of vaccination and a photo ID.

NASCAR has lifted its mask mandate for competitors when outdoors in the garage and pit areas starting this weekend at Dover International Speedway.

Masks will still be required when competitors are inside any buildings or team haulers, NASCAR said Thursday.

NASCAR says its focus is on encouraging everyone to get vaccinated and preventing indoor spread of COVID-19.

NASCAR last weekend had a soft re-opening of the garage area and allowed 350 fully vaccinated sponsors and guests into the competition footprint at Darlington Raceway. It was a trial run to set policy moving forward. The garage is closed at Dover this weekend but will be open to 550 sponsors and guests at Circuit of the Americas in Texas next week.

NASCAR is not requiring its competitors be vaccinated, only guests and media who enter the garage area.

NASCAR was one of the first major sports to resume competition last May at the start of the pandemic. It was also the first to complete its full schedule in November.

The Milwaukee Brewers will begin allowing fans to fill all the seats at American Family Field for home games on June 25.

The Brewers have been filling no more than 25% of their seats for home games so far this season. They announced Tuesday they would start filling up to half the seats at American Family Field beginning with Saturday’s game against the Atlanta Braves.

Now they say they’ll be ready for fans to fill the entire stadium starting in late June. The move will take effect for a weekend series with the Colorado Rockies.

American Family Field has a seating capacity of 41,900.