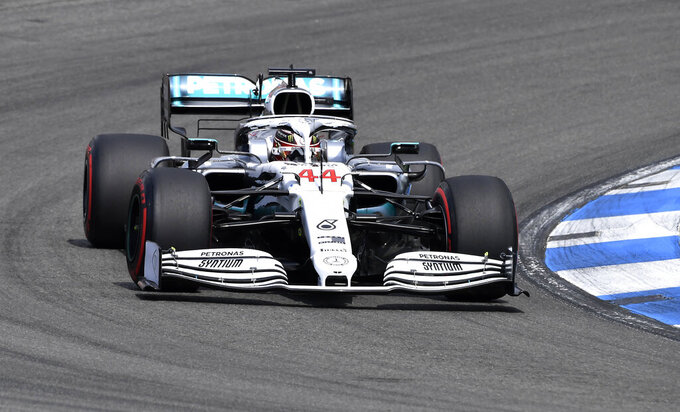 Mercedes driver Lewis Hamilton of Britain steers his car during the qualifying Formula One session at the Hockenheimring racetrack in Hockenheim, Germany, Saturday, July 27, 2019. The German Formula One Grand Prix will be held on Sunday. (AP Photo/Jens Meyer) 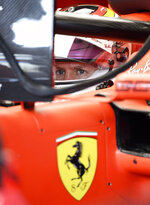 HOCKENHEIM, Germany (AP) — Lewis Hamilton took pole position for the German Grand Prix on Saturday, while Sebastian Vettel's miserable form continued for Ferrari as he was unable to even set a time and will start from the back.

It got even worse for Ferrari as Vettel's teammate Charles Leclerc was unable to start the last part of qualifying, known as Q3, and is set to begin from 10th place on the grid on Sunday.

"I don't know really how we did it today. I'm not quite sure what happened to the Ferraris," Hamilton said. "I think if Leclerc had done a lap at the end, it would have been close between us."

Ferrari is winless in 10 races this season and that terrible run looks to continue, while Hamilton is aiming for a sixth win in seven. It was a record-extending 87th pole for the five-time world champion, who is 11 wins shy of Michael Schumacher's record of 91.

"A bit disappointed with qualifying and I just struggled," said Bottas, who is level with Hamilton on four poles this season. "Ferrari (were) extremely quick and we knew it would be difficult to beat them ... We've been a bit lucky."

Vettel, who crashed at last year's German GP despite leading from pole, looked visibly upset as he climbed out of his car in the team garage.

The incident happened during the first part of qualifying, making him one of five drivers eliminated from Q1. Ferrari said the problem was with airflow to the turbo, even more surprising given Ferrari had topped all three practice sessions heading into qualifying.

"Lost out on a big chance," Vettel said, reflecting on his home race. "It's very painful here, obviously. I was looking forward to having fun."

Worried faces in the Ferrari garage turned to sheer horror as mechanics then detected a problem on Leclerc's car, ruling him out of the top-10 shootout in Q3.

"Mine was a fuel system problem. It is a shame but we will be trying to understand what happened and not to reproduce it. The car felt great today so it's a shame it ended like this," Leclerc said. "I feel for the whole team. I will give absolutely everything to make everyone smile again tomorrow."

Television footage showed a Ferrari fan in the stands sinking his face into his hands in disbelief.

"It is a shame for Ferrari and for Sebastian at his home GP," Wolff told broadcaster Sky Sports, adding "Ferrari have an illness that they need to cure and we need them so we can have a competitive championship."

With Leclerc ruled out of Q3, Ferrari's principal Mattio Binotto looked pensively down at the floor, with his hands in his pockets. After two disappointing — yet relatively competitive seasons — things have gone from bad to worse for Ferrari since Binotto replaced Maurizio Arrivabene.

Leclerc is only in his second F1 season — his first with Ferrari — and has four podiums in the past four races. But for Vettel, a four-time F1 champion, it's yet another setback after capitulating against Hamilton in the last two title battles.

Vettel has not won since last year's Belgian GP, a run which now looks likely to reach 19 races. Two weeks ago at the British GP, he crashed into the back of Verstappen after misjudging a routine overtaking move — the latest in a growing list of errors by the German.

Daniel Ricciardo, a winner of seven F1 races, was another notable rider eliminated early in Saturday's qualifying. The Australian failed to make it into Q3 as his frustrating first season with Renault continued.

Earlier, as temperatures dropped at the Hockenheimring following a recent heatwave, Leclerc posted the fastest time in final practice ahead of Verstappen and Vettel.

But Hamilton, who leads the championship by 39 points ahead of second-place Bottas, delivered again when it mattered.

He won last year's race after starting in 14th place, gifted the victory by Vettel's crash in the rain.

The rain is expected to fall again on Sunday, and this time it's Vettel who is starting way behind Hamilton.