Haley wins at Daytona after teammates crash on final lap 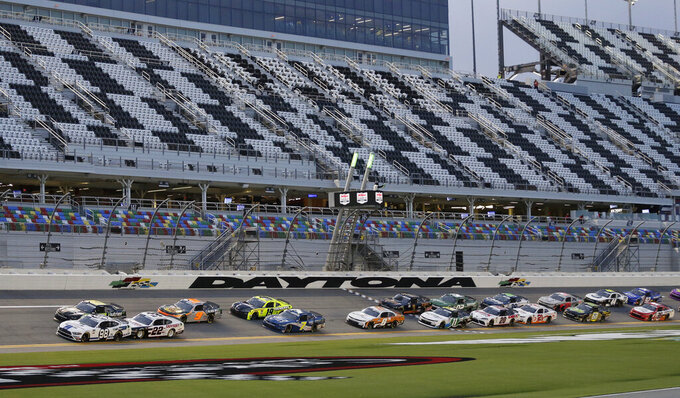 DAYTONA BEACH, Fla. (AP) — Justin Haley and his Kaulig Racing teammates had a meeting a couple of hours before the green flag at Daytona International Speedway on Friday. The topic was working together. The consensus was every man for himself at 10 laps to go.

Ross Chastain waited much longer to make his move. Chastain wrecked race leader and Kaulig teammate AJ Allmendinger on the final lap, allowing Haley to pick up a victory no one saw coming.

Chastain made a move on the inside and clipped Allmendinger, turning him sideways and collecting both Chevrolets. Austin Cindric also was involved.

Haley slipped through the smoke and took the checkered flag — his latest shocker at the superspeedway.

“I hope we get some good ratings on that one,” Chastain said. “It’s terrible to run into your teammate like that. It must be my fault.”

No doubt, and Chastain quickly realized that while watching a replay.

“I hate it, man,” said Chastain, who is trying to get a full-time ride in the premier Cup Series. “It’s not going to help me moving forward. Coming to the checkered, what am I supposed to do? Finish second?”

Haley said Chastain's maneuver was exactly what the teammates agreed should happen. It just ended up being inches away from a clean pass.

“At least one of us got it,” Haley said.

It was Haley’s second of the season, both at superspeedways. He also picked up a victory in the Cup Series at Daytona last year, claiming a rain-shortened event.

“I try to take care of my teammates, but it is what it is. It's for the win," Allmendinger said. "Ross is going for the championship and going for a win there. ... I saw him get low and thought he'd take care of me a little bit considering I was there. But he's going for the win. It's just disappointing because we were going to have another 1-2-3 Kaulig finish at Daytona.”

The Kaulig cars looked like the ones to beat over the final two stages. The only question was which one would end up in victory lane.

It looked to be Allmendinger or Chastain over the final 20 laps, with Chastain fending off every challenge from Cindric and Briscoe — the series’ top two cars all season.

In the end, it was Haley.

No fans were in attendance because Daytona would have to sanitize much of the venue overnight. The Cup Series regular-season finale is Saturday night.

Back-to-back big ones knocked out a number of cars in the second stage, including two of the four JR Motorsports entries.