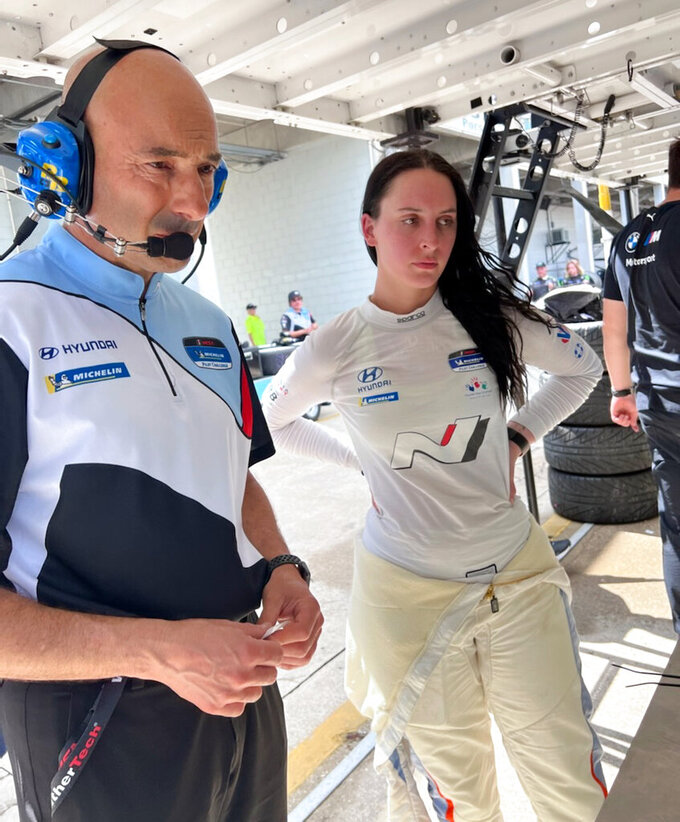 Taylor Hagler clocks in for work at 7:30 a.m. each day at a Texas aviation maintenance company for her eight-hour shift as an administrative assistant.

She has no qualms discussing her desk job with strangers.

It's her second career that she avoids when a random person asks her what she does for a living. It isn't always easy to explain that she's a racecar driver, and a good one, too: Hagler is just the second female champion in IMSA sports car history.

“I tend not to tell people. My parents and my sister will be the first to say ‘She’s a racecar driver!' and I'm usually burying my head in my phone,” Hagler told The Associated Press. “The last time, we were out to dinner and this person was paying attention to our conversation and said ‘Oh! Like FS1?’ I said ‘No, what is that?’ and they were like ‘Forza' and I had to say ‘No, that’s a video game. I race a real racecar.'"

The duo last year won the class championship, making Hagler the first woman to win the TCR category and only second female champion in IMSA history.

The 26-year-old Texan is a latecomer to motorsports and only seriously began pursuing it after retiring from equestrian show jumping. Her father was the racing fan and had purchased a three-day certificate for Hagler's older sister to participate in the Skip Barber Racing School.

But her sister, Crystal, had no interest and Taylor was only 13 years old at the time. The certificate collected dust for several years and Hagler continued on her own journey that took her to college at UTSA.

It wasn't until she was with her family at Petit Le Mans and saw the Skip Barber booth at the track that boredom led her to ask if the certificate had expired.

“I was like, ‘Hey, can I use it? Skip Barber says it's still good,’” Hagler said. “So my dad bought a second three-day certificate and did it with me, and it ended up being just a fun thing for dad and daughter to do together.”

That was 2015 and Hagler returned to the Barber school the next year for a two-day session. A shoulder injury that required surgery cost her most of 2017 but by the end of that year she successfully acquired her racing license.

She had early success in lower divisions — a podium finish in her debut race at Circuit of the Americas in Austin — and was one of the first drivers to pass through the HPD Academy, where she trained on GT3 cars and expanded her participation in the IMSA Michelin Pilot Challenge program.

Hagler moved to Herta's program last year and teamed with Lewis on a breakthrough IMSA win at Lime Rock Park that sparked their championship run. It was their only victory of the season — Hagler and Lewis opened this season in January with a runner-up finish at Daytona — and she'd like to add more victories to her resume as they defend their title.

“The goal is obviously to win another championship, but setting sights a little bit shorter, I would definitely like to get a couple more wins,” Hagler said. “It's a little bit weird and rare to win a championship with only one actual race win, and the thing me and Bryan and my co-driver and my engineers have been working on is qualifying. That's always been a weakness of mine, I take too long to get up to pace, and by the time I do, my tires are gone. So I'd like to qualify better and put us in position to win more races.”