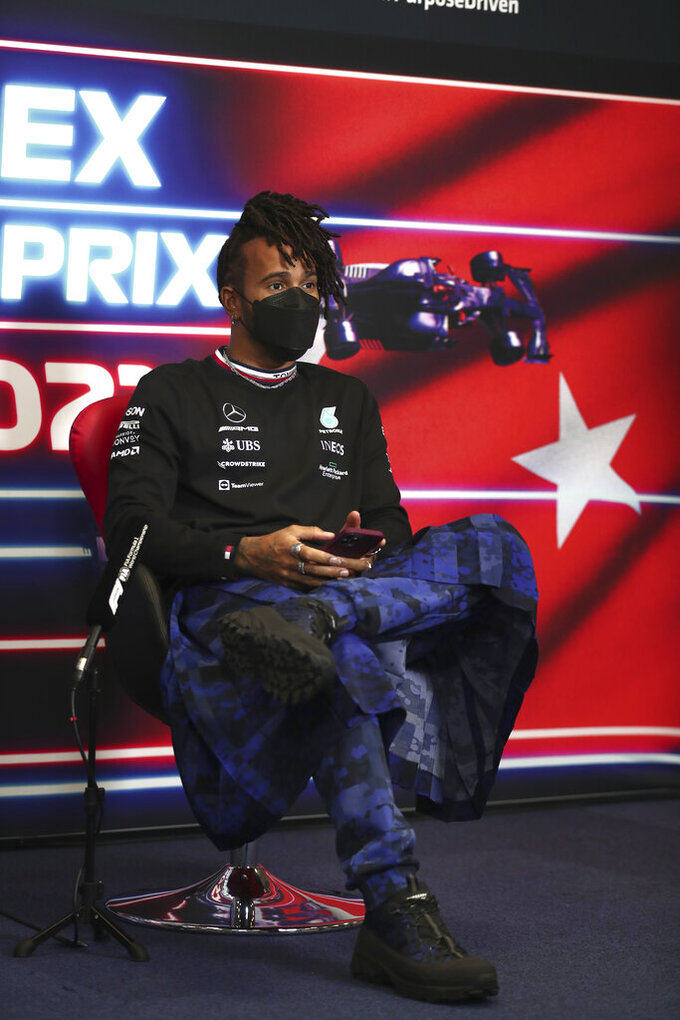 Mercedes driver Lewis Hamilton of Britain listens to a question during a press conference ahead of Sunday's Formula One Turkish Grand Prix at the Intercity Istanbul Park circuit in Istanbul, Turkey, Thursday, Oct. 7, 2021. (Sedat Suna/Pool Photo via AP)

Lewis Hamilton and Max Verstappen are both exuding an air of calm relaxation despite being at the center of one of the most intense Formula One title battles for many years.

That tranquility hasn't exactly been on display on the track lately, with the two drivers crashing into each other in two high-profile incidents. Hamilton knocked Verstappen out of the race at the British GP before the pair took each other out at the Italian GP.

Those races were followed by finger-pointing from the drivers and blame attribution between Mercedes and Red Bull. Meanwhile, the standings switched hands as Verstappen's sizeable lead was swallowed up by Hamilton, then Verstappen regained the lead before losing it at the Russian GP.

The record-chasing Hamilton leads Verstappen by two points with seven races left — including this Sunday's Turkish Grand Prix — even though Verstappen leads the Mercedes star 7-5 when it comes to wins and 7-3 for pole positions.

Despite the tense situation, Verstappen insisted that the Red Bull team garage is a sea of calm.

“We’re very relaxed and very focused. Of course, we want to win so that mentality's definitely there," Verstappen said Thursday. “But there’s nothing you can force. You shouldn’t really stress it.”

Not even when you are within reach of a first world title at the age of 24?

“I don’t think about it too much. I just know when I have to race, so I will be there," he joked. “It’s not really going to change my life; I enjoy what I’m doing and that’s also very important so for me there’s not much to worry about.”

Hamilton, who arrived in the paddock wearing a kilt and matching trousers, has been in similar situations before.

“It’s the understanding that what will be, will be," he said. “All you can do is prepare the best way you can. I just don’t worry about ‘what ifs’ and that stuff ahead.”

That stuff ahead is merely the prospect of an eighth F1 title to stand above Michael Schumacher atop the all-time list.

But the 36-year-old British driver said he's not having any problems keeping his mind free of stress.

“I find it relatively easy, as I have these other outlets where I can blow off steam," he said. “Coming back into the racing environment fresh, recovered, positive.”

Hamilton popped over briefly to Paris this week to visit Fashion Week and said those kinds of trips are invaluable to his mental well being.

“It’s a much different world. There is no fashion in Formula One, I always felt like it (F1) was always a place where it wasn’t easy to be yourself," he said. “A fashion show, a Fashion Week for example, you’re surrounded by people from all different walks of life expressing themselves in different ways. I love that environment, where I’m able to express myself.”

His latest fashion choice was certainly getting some attention in Turkey. Hamilton showed up wearing a dark blue kilt with a check pattern, part of an outfit he snapped up online from a famed British fashion house.

“Quite daring, I love the outfit. Just gender neutral, everyone can wear what they want," he said. "There will be people that don’t understand it. That’s OK, hopefully they’ll eventually go through the opening of their mind phase and (understand) people can be who they want to be.”