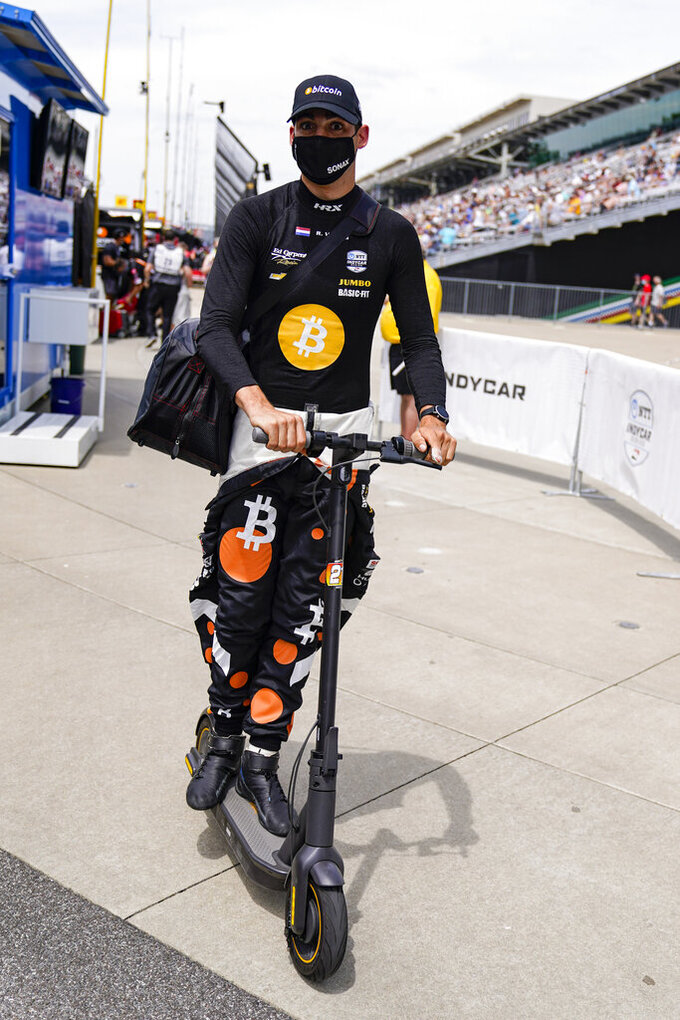 Ed Carpenter isn't comfortable as a team owner putting too many restrictions on his drivers, not even a breakout young star thick in the championship race.

Carpenter didn't lose his cool when Rinus VeeKay called to tell the boss he'd fallen off his bicycle on a training ride and broken his collarbone. The Dutchman was on a 75-mile ride when he lost control, flew over the handlebars and landed so hard that he cracked his helmet and his left shoulder.

“I definitely wasn’t angry or upset with him, he didn’t mean to hurt himself,” Carpenter told The Associated Press while driving to Wisconsin. “I know how I like to live my life and I’ve had minor injuries in the gym in a controlled environment. So, (stuff) happens and it can happen anytime, anywhere.”

VeeKay will be replaced by Oliver Askew on Sunday at Road America, where Pato O'Ward takes a 56-point lead over VeeKay in the standings. VeeKay is ranked fifth but only 20 points separate third through sixth in the title race.

The 20-year-old will lose valuable ground by missing Road America after his mishap while out riding with trainer Raun Grobben. They left IndyCar's doubleheader in Detroit and headed toward Chicago on Monday; VeeKay's parents went to the beach, the driver and his trainer went out on “a trail with good asphalt. No cars, no motorcyclists, we were just the only ones out there and taking it easy, just chatting.”

He doesn't know what caused him to lose control of his bike and said Grobben tried to grab him and stop the fall. Grobben suffered tire burns on his arm and knee.

“He’s like ‘Are you OK?’ and I said ‘Well, I think I broke my collarbone,’” VeeKay said. “I just kept hoping it was pulled out of the socket or something.”

He said he twice nearly blacked out on the trail from the pain, and Grobben left him to go to the main road to call an ambulance. He was taken to a hospital in Hobart, Indiana, where X-rays confirmed a broken collarbone.

Now Askew, his rival in lower racing divisions, will drive VeeKay's car as Askew subs for the second consecutive race. Askew replaced Felix Rosenqvist at Detroit on Sunday when Rosenqvist was injured in a crash a day earlier. Kevin Magnussen is making his IndyCar debut as Rosenqvist's replacement at Road America.

“We compete in a sport where things happen,” Carpenter said. “Rinus is missing a race, Felix is missing another race, and it is two totally different scenarios, but the end result is the same.”

Both VeeKay and Carpenter said IndyCar's medical staff indicated VeeKay can return to competition at Mid-Ohio on July 4, the next IndyCar race.

VeeKay has texted with two-time IndyCar champion Josef Newgarden, who broke his collarbone in a 2016 crash at Texas while driving for ECR. Newgarden had the same surgery and didn’t miss a race — he was back in the car at the next scheduled IndyCar event two weeks later.

“We are part of a very exclusive ‘Driving with a Titanium Collarbone Club,'" VeeKay said. "Josef thinks I am going to be all right and he looks pretty good the last few years, so a broken collarbone might be faster, who knows?”

Perhaps faster, but not in the same position he was before his fall.

“I want him, or anyone who drives for us, to do what they need to do to be prepared and the best version of themselves,” Carpenter said. “It's something different for everybody and I won't put any restrictions on him that aren't already there.”

But what about the championship?

Carpenter said there's a chance Mid-Ohio could become a doubleheader, which would give VeeKay an additional opportunity to make up points. Beyond that, all the team can do is hope he performs when he returns.

VeeKay scored his first career IndyCar victory in May on the road course at Indianapolis and was runner-up in the first race at Detroit. He's part of a changing of the guard in IndyCar, where four winners this season are aged 24 or younger and VeeKay's energy and enthusiasm have created buzz for himself and ECR.

So he was nervous to call Carpenter and acknowledged he was “a little bit scared to call my father” because he knew former racer Marijn van Kalmthout was going to be angry. The family has sacrificed and spent personal funds to support VeeKay, who moved to the United States on his own as a teenager and is the only driver to win at every level of the Road to Indy ladder.

“You know it takes a lot of effort (to make it in racing) and he was definitely not happy. I will just call it very upset,” VeeKay said. His parents picked him up in Hobart and drove VeeKay and his trainer to Indianapolis, where VeeKay underwent surgery Tuesday to insert a plate in his collarbone.

VeeKay said his parents had been scheduled to be in the U.S. through Mid-Ohio, but they returned to the Netherlands after his surgery as a distraction from their son not racing this weekend.

“Well, I'd be scared to call my dad, too,” Carpenter said. “But it's not over. There's a driver's championship, there's an engine championship, the car is still competing. Oliver will do a good job for us and we'll rebound.”